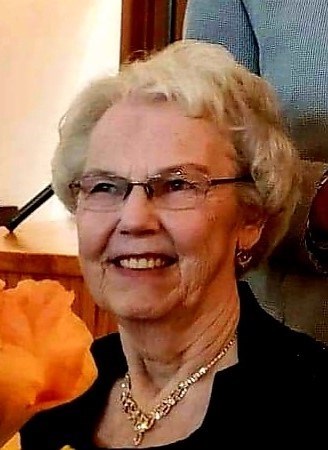 Our beloved wife, mother, grandmother and great-grandmother,Joyce Winnifred Lynch (nee Smith) of Osage, SK passed away on November, 19, 2020 at the Fillmore Health Centre at the age of 82 years after a brave a battle with cancer. She was predeceased by her father, James Elvin Smith in 1949; mother, Marie Winnifred Smith in 1985; brother, Don Smith in 2020; nephew, Brian Keller in 1957 and brother-in-law, Floyd Keller in 2013. Joyce is survived by her loving family, husband, James; son, Leslie (Deanne) Lynch; son, Brant (Charles Marcoux) Lynch; daughter, Angela (Trevor) Ogden; grandchildren: Chansi (Patrick) Bourke, Jordon (Dakota) Lynch, Keegan Lynch (Shelbi Rowland), Justin (Cassandra) Ogden and Dylan Ogden (Danaka Kolybaba); great-grandchildren, Hudson, Ivy & Sage Bourke. Joyce will also be missed by her best friend and neighbour, Madge Glover; sister, Pearl Keller; brother, Mervin (Rita) Smith; brother, Ken (Terry) Smith; sister-in-law, Lorna Smith as well as many nieces, nephews, cousins, relatives and friends. Joyce was a very kind and grateful person and will be missed by all who had the honour of being a part of her life. Joyce was born on a farm southeast of Osage (SE 22-12-12 W2) on July 10, 1938. She attended school in Osage. In 1956, Joyce and Madge ventured off to find employment in Regina. Joyce worked at both Sears and the City of Regina during those years. Joyce married Jim in Osage on June 24, 1959. Joyce was not only a “farm wife” but a farmer. She spent many hours in the field doing summer fallow, but her favourite time of the year was harvesting in the fall. She loved to combine. Joyce was an integral part of the success of the family farm. Joyce was also willing to lend a hand and over the years she belonged to a variety of community organizations in Osage. She also loved to curl in the winter and most winter weekends were spent curling in local lady’s bonspiels. Spending time with her family and friends was something that Joyce cherished. She loved to go camping with her friends and family. It was a tradition to take a ten-day camping trip yearly at the beginning of July. Many fond memories were made on these camping trips and Joyce and Jim continued this camping tradition until a couple of years ago. Joyce’s health failed in the last five years after receiving a diagnosis of cancer. She was able to remain at home until June of this year at which time she became a resident of the Fillmore Health Centre. Joyce received tremendous care in Fillmore and her family wants to express gratitude and thanks to the Stoughton Homecare Team and the entire staff of the Fillmore Health Centre. The care and compassion that she received in her final journey was very much appreciated. Her family also wants to thank Madge and Tim Glover for their care and support of Joyce as her health declined. A Private Family Graveside Service & Interment took place on Tuesday, November 24, 2020 at 2:30 p.m. at Osage Cemetery, Osage, SK. with Sharon Elliott officiating. Donations in memory of Joyce may be made to Fillmore Health Centre at Box 246, Fillmore, SK, S0G 1N0 or Allan Blair Cancer Clinic at 4101 Dewdney Avenue, Regina, SK, S4T 7T1.
See more See Less

In Memory Of Joyce Winnifred Lynch