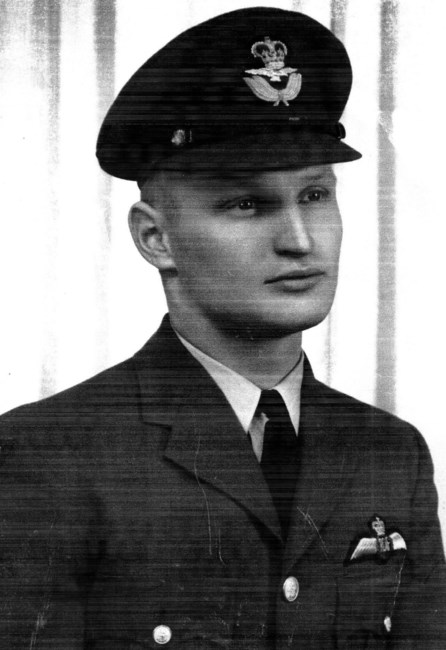 It is with profound sadness that we announce the peaceful passing of Lakeside resident, Ronald Hudson on January 9, 2023 aged 88 years, at Alicia’s Convalescent Home, Ajijic, Mexico. Ron was predeceased by his parents, Gordon and Muriel Hudson; sister-in-law, Betty Hudson and sisters, Marion Hudson and Gwen Brannen. Ron leaves behind Babette, his loving wife of 62 years; as well as daughter, Nadine (husband, Ihor Salij) and two grandchildren (Christopher & Nicole); his son, Mark Richards; two brothers, Merlin (Irene) of Millet, AB and Gary (Barb) of Weyburn, SK as well as nieces and nephews. Born in Weyburn, SK in 1934, Ron enlisted in the RCAF at the age of 22. He served ten years as Flight Lieutenant, flying the Canadair F-86 Sabre from RCAF Station Grostenquin, 2 Fighter Wing in northeastern France. It was here that he met his beloved wife, Babette. Upon leaving the RCAF, Ron studied at the University of Western Ontario, graduating with a Bachelor of Arts Degree. Thereafter, Ron joined Air Canada as a Captain for 28 years. After retirement from Air Canada he continued his love of flying with Cargolux Airlines International for another four plus years. In 1999, Ron finally retired from flying and he & Babette relocated to beautiful Ajijic, Mexico. His retirement years were occupied with teaching English through both the Wilkes Centre (LCS) and Ninos Chapala Ajijic. An accomplished dancer, Ron also taught Ballroom Dancing to many fellow retirees in the Lake Chapala area. In 2003, Ron was instrumental in the formation of 904 Wing, Royal Canadian Air Force Association, taking the office of President twice. Ron lead actively until 2017. He was also a fraternal member of the (AEMA) Mexican Airforce Association (now APAEMA). Throughout his retirement, he was a regular at the Sabre Pilots Association of the Air Division Squadrons (SPAADS). The final reunuion was held in September of 2022. Ron was there! Anyone so wishing, may consider donations in Ron’s memory to the Royal Canadian Legion Branch No. 47 Weyburn, Saskatchewan.
See more See Less

In Memory Of Ronald Hudson

A Celebration of Life will be held in the near future.