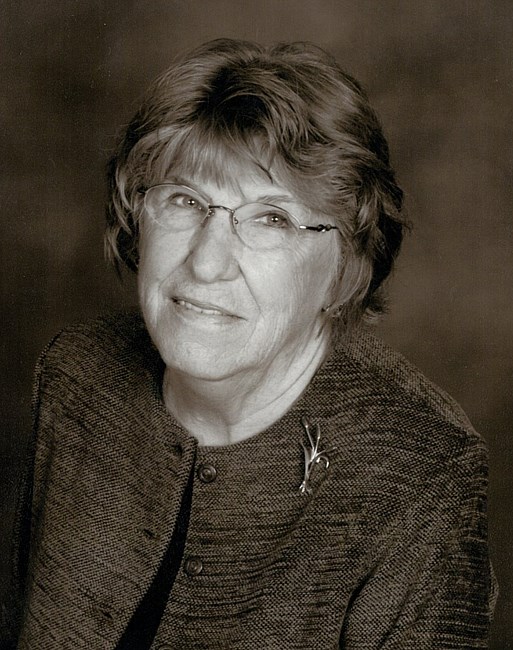 Anne M. Ebel 1930-2022 Born January 10th, 1930, on her father’s homestead in Greenway, South Dakota to Lydia (Opp) and Emil Diede, Anne M. Diede was not one to stay on the farm or in South Dakota. As a child, she could see the lights of Eureka, SD, from her parent’s farmhouse and longed to go to the big city. At that time, Eureka was a thriving community of about 1,500 people. Once, upon hearing a meadow lark’s call, she told me of the feeling that the sound brought to her; she spoke of the accompanying sounds of a single wind gust on a fence and grass and how the gust would bring a moment of relief from the South Dakota summer’s sun and heat but could not pierce the solitude of the vast open prairie. Even before the age of 18, Anne was a nursing student and soon after was on her first nursing job in Hot Spring, South Dakota. There at a music event in the VFW, she met her future husband, Donald Ebel. Anne followed a job opportunity to the big city of Denver, Colorado and Don was on his way to opportunities in Texas when they met up again and decided to marry and make a home together in the Denver area. Their firstborn, Barlow (Barry) Ebel, was born soon after, and then Craig Ebel came in another three years. They bought a house on Bradburn Boulevard in Westminster, a mile-long street lined with crabapple trees that smelled of the pink blossoms in the spring and fermenting fallen apples in the fall. They raised their family there and were members of the Westminster First Presbyterian Church. Brian Ebel was born a few years later, the youngest of the three sons. Anne left her nursing career and started prepared taxes, first at the Lakeside Mall Sears, then on her own. She and Don liked country music and would visit the Country Dinner Playhouse on special Saturday nights. This is where Anne became a lifelong fan of Dwight Yoakam, and one of her most exciting days was when she got to meet Dwight before a concert. Anne was heartbroken at the loss of Don in 1997 and then Barry in 1998. Anne moved to Phoenix, Arizona, to be a full-time snowbird in retirement. Recently she returned to Westminster and met Naomi Ebel, her first great-grandchild. Anne is survived by her sons Craig Ebel (Westminster, CO) and Brian Ebel (Wheat Ridge, CO) and grandchildren Allison Green (Atlanta, GA), Claudia Gibson (Idahna, OR), Eric Ebel (Centennial, CO), Sophia Ebel (Fort Collins, CO), and Natalie Ebel (Wheat Ridge, CO) and great-grandchildren Naomi Ebel (Centennial, CO), and Nieka Gibson (Idahna, OR).
See more See Less

In Memory Of Anne Ebel