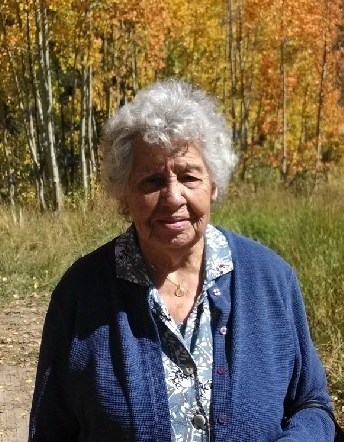 Ermenia Marie Padilla Daley, age 105, passed away Thursday March 14, 2019 at the Eastern Star Masonic Retirement Campus in Denver. Marie was a devoted wife, mother, grandmother and homemaker. Her life began in a tent at the Ludlow miner’s camp during the southern coalfield strikes of 1914. Her life as a child was not easy as her father left the family and her mother was left to raise the five children. Unable to care for all of her children her mother, Clorinda, in the Hispanic tradition, sent them to live with other families in the San Luis Valley. Later she was sent to the Sacred Heart orphanage in Pueblo, CO and then to the Queen of Heaven orphanage in Denver where she graduated from high school. While working in Denver, she met and married Alfred W Daley (Al) on June 11, 1947. The couple’s son William (Bill) was born September 10, 1948, and daughter Florence (Pepper) arrived February 9, 1956. Marie’s life was then filled with raising a family and participating in activities at school and church. The Daley’s were members of All Saints Episcopal and North Presbyterian churches. Marie was very active in Eastern Star and Al was a Mason. After the kids left home and Marie and Al became empty nesters the traveling part of their lives began. Marie accompanied Al on many of the business trips he took throughout the United States as a transportation consultant. The travel highlight was the two years they spent living in Saudi Arabia. At the one year anniversary and at the end of the contract they were able to come home by any route they wanted. So Marie and Al went around the world. Retirement saw Marie and Al moving to Limon and then Canon City and finally back to Denver to be close to their grandchildren Ryan and Alison Daley. Both Marie and Al enjoyed being doting grandparents and spent a lot of time with Ryan and Alison telling many stores about their travels, which must have had an impact as both grandchildren love to travel. Marie was a charming, loving, polite woman who was always kind to everyone she met which garnered her many friends at church, Eastern Star and at the retirement community. Marie was preceded in death by her mother Clorinda Padilla, father Elfego, and siblings Joaquin, Prudencia, Antonia, Filimenia and Elfego as well as husband Alfred. She is survived by her son William (Susan) daughter Florence (Doug) grandson Ryan (Jennifer) granddaughter Alison and great grandson Declan. In lieu of flowers, donations can be made to Eastern Star Masonic Retirement Community.
See more See Less

In Memory Of E. Marie Daley