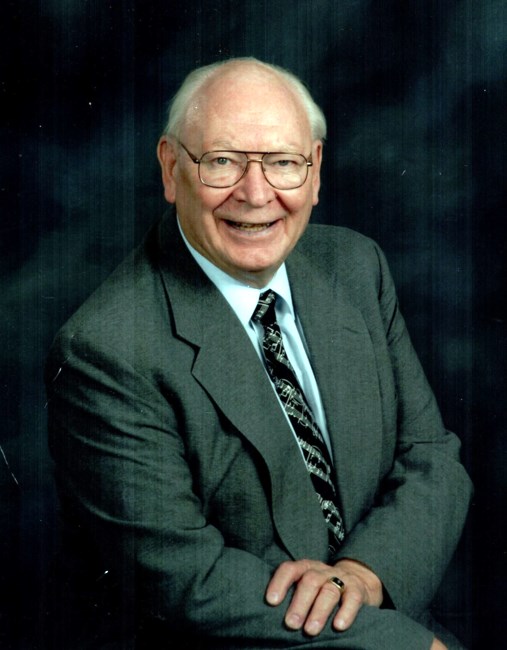 Larry Dean Boye, "LB", 86, of Arvada, Colorado passed from this earth on October 19, 2018 after a lifetime of beautiful music as an educator. Larry was born February 24, 1932 in Ellsworth, KS to Clarence Boye and Anna (Adamek) Boye and was raised outside Holyrood, KS. Larry devoted his entire life to the performing arts, teaching music to students of all ages. He started on his musical pathway his senior year at Holyrood High School in Holyrood, KS. He graduated from Bethany College and Wichita State, earning Bachelors and Masters degrees of Music Education. While in school, he spent summers performing in multiple musicals at the Starlight Theater in Wichita, Kansas. Larry started his music teaching career at high schools in Hoxie and Columbus, Kansas, before moving on to direct choral groups and musicals at Manhattan High School, including the Manhattan Pops Choir. He rose to prominence as director of the Ball State University singers in Indiana from 1968 to 1985. During his tenure the group performed in dozens of states and countries around the world, including presidential inaugurations and USO tours, spreading goodwill through music to the point the group became designated as the Goodwill Ambassadors of the State of Indiana. After leaving Ball State, Larry continued his career as a vocal specialist for Walt Disney Productions before going back to college teaching at Brevard Community College in Florida in 1987. There he directed musicals and several choral groups that also performed worldwide. Finally, he rounded out his career as a consultant for The Young Americans College of the Performing Arts in Los Angeles, once more traveling to many states and countries and encouraging hundreds of students in their performance careers. In his personal life, Larry continued his extensive involvement with music, directing church choirs in nearly every town where he lived. Always ready with a humorous phrase or pun, Larry loved music and life and was memorable to all he met. He permanently retired in 2008. His additional passions included fishing, history books, opera, classical music,skeet shooting and woodworking. Larry is survived by his daughter Tammy Derloshon (Castle Rock, CO), son J.D. Boye and daughter in law Kathy (Aurora, CO), five grandchildren (Andi, Chris, Jillian, Lauren, and Makenna) and upwards of a thousand former students who remember "LB" fondly. He was twice divorced. He was preceded in death by Sue Jean (Snyder) Boye his wife of 30 years and is survived by Pamela Hoopingarner Boye his wife of 18 years. A viewing and memorial is scheduled for Thursday, Oct 25 from 4:00-7:00 pm in the Pavilion at Olinger Crown Hill Mortuary in Wheat Ridge, CO. A service will be held at Bethlehem Lutheran Church in Lakewood, CO on Friday, Oct 26 at 10:00 am. Graveside service will be at the St Peter Lutheran Cemetery in Holyrood, KS on Saturday, Oct 27 at 1:00 pm. All are welcome. In lieu of flowers, donations can be made to the University Singers at Ball State University, to the choral department at Eastern Florida State College (formerly Brevard Community College), Bethany College choral department or to the Manhattan Pops choir at Manhattan High School in Manhattan, KS.
See more See Less

In Memory Of Larry D. Boye