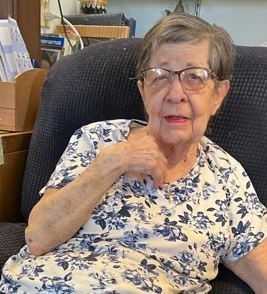 It is with deep sadness that we have to share the news of Patricia Greenmyer's passing. On May 7th, our Lord called her home. A true light in this world has gone home to our lord and savior Jesus Christ. Our lives are now diminished, and our world is a little darker. Our hearts are broken by our loss, but we wanted to share a little bit of her life and history with you. Mom was born on November 2nd 1935 to Hubert Henry Brigance and Lorena Brigance. She had an older brother Duane Brigance who preceded her into the Lord open arms. Patty started her working life at an oil company (don't know which one), and she was there for only 2 years before she went to Star Bread where she worked for the next 25 years of her life. While at Star Bread mom met her best friend for life Vi Hawkins. After Star Bread mom went to work Atlas Metal and Iron where she retired after 20 years. During her previous marriage mom took in her brother's daughter Debbie, and raised her as her own. Patty soon met and married Adolph on December 9, 1967, and on March 11th 1969 had twins; a boy (Daniel) and girl (Stacey). Patty was preceded into heaven by Terri's first daughter Laura (1980), her brother Duane Brigance (1991), and her adopted daughter Debbie Garrison (2009). Mom is survived by Adolph her husband of 54 years. Her children Terri Griffice from Dickinson Texas, Daniel Greenmyer from Denver Colorado, and Stacey Anderson from Littleton Colorado. Patty has five grand children: Ashley Griffice from Dickinson, Texas, Kendra Anderson from Littleton, Colorado, Rayanne(Daniel) Mebane from Littleton, Colorado, Jonathon Anderson from Ogallala, Nebraska, and Raylene(Jayce) Trejo from Littleton, Colorado. Mom was blessed with eight great grand-children. Isaiah Anderson, Alexander Anderson, Matthew Anderson, Kendrick Mebane, Zuri Mebane, Kenyon Anderson, Kazlyn Anderson, and Dominic Trejo. One thing about our mom is she loved big with a full heart. We never doubted that she loved us with every part of her being. Her and dad's life together was a story book romance. Mom always told us that the three most important things in life are love, caramel chocolate truffles, and red lipstick. At some point in all of her grandkids lives they have literally tried to wear her shoe but only mom could fill her massive size 5 shoes. Mom may be physically gone, but her love and spirit will be forever in our hearts, minds, and souls. Her funeral will be held on Monday May 16th at Crown Hill Cemetery. The viewing will be from 2:00pm to 2:45pm with the service to follow starting at 3:00pm.
See more See Less

In Memory Of Patricia Leona Greenmyer