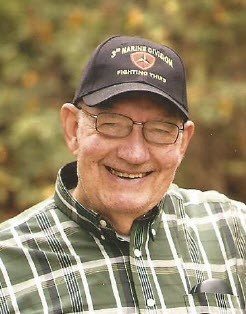 William Franklin Crawford, known mostly as Bill, or Mr. “C” passed away at his home of many years in Fairfax, Virginia on December 2nd. Bill was born on October 4, 1935 in Mobile, Alabama to Frances Annette Bailey Crawford and Marion Edward Crawford. In addition to his parents he is preceded in death by his two brothers, Marion Edward, Crawford, Jr., and Ronald Terry Crawford . He graduated from Vigor High School in Prichard, Alabama where he played both football and baseball. After graduation he enlisted in the Marine Corps where he served 3 years during the Korean Conflict as a Radio Operator. He was stationed in California, Japan and Miami, Fl. during his service time. After release from the Marine Corps he enrolled at Mississippi Southern College (now the University of Southern Mississippi) in Hattiesburg, where he played football and baseball, and married his High School sweetheart, Elizabeth Jones (Betty Lou) and they have celebrated 65+ years of marriage. After graduation from Southern Bill worked for the Federal government for 38 years in several different agencies: U.S. Air Force, NASA, HEW, DNA. After retirement from DNA, in 1991, he worked for many contractors supporting Government agencies. He is survived by Betty, 4 children: Cindy Crawford, Cathy Crawford, William Crawford, Jr. and Robert Crawford (Veronica); 4 grandchildren: Alex Petit, Jake Crawford, Anna Crawford, and Nicholas Crawford, many nieces, nephews, cousins, and friends, including Allegra Matarangas, Jamie Lindley and David Magnet. Bill was very much a family man, attending all activities of his children and grandchildren as recently as October 2022. Bill was an avid sportsman. He hunted, fished, and played softball around the Fairfax area until age 70. He coached many Little League teams and the Fairfax Circle Church’s softball team for many years. He and Betty have been active members of Fairfax Circle Church for almost 50 years. Visitation will be held at Demaine Funeral Home, Fairfax, VA, on Sunday December 11, from 4:00 - 6:00. A Celebration of Life Service will be held at Fairfax Circle Church on Monday December, 12 at 1:00. In lieu of flowers please consider making a donation in honor of Bill to Fairfax Circle Church at https://www.fairfaxcirclechurch.org or to the Fairfax High School Athletics Program.
See more See Less

In Memory of William Franklin Crawford