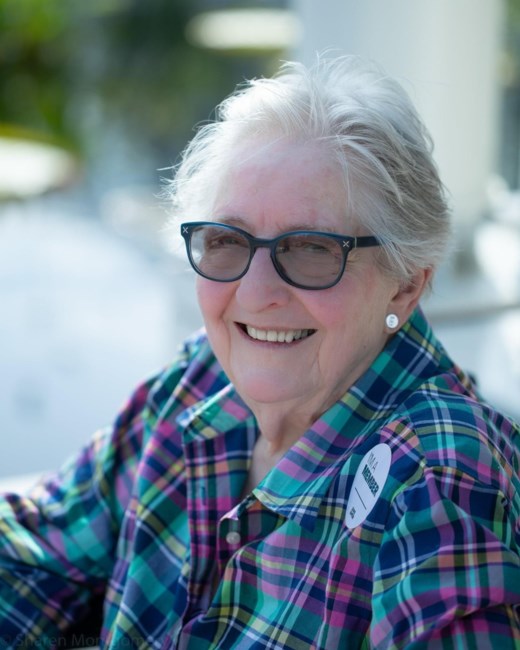 Beverly Carolyn Leta (Jiskra) Montgomery, formerly of Madison, CT, passed away peacefully at Poet's Walk Memory Care Community in Fredericksburg, Virginia, on August 12, 2022, just days before her 90th birthday. Beverly was born in Bloomington, Illinois, on August 14, 1932, to Joseph and Leta Jiskra. She was the beloved and devoted wife of the late Robert Hayes Montgomery for 45 years, and loving mother of Susan Navarro of Odenton, Maryland; Sharen Montgomery of Palmyra, Virginia; and Sarah Fortunato of Manassas, Virginia. She is survived by her brother and sister-in-law, Joseph and Arleen Jiskra, her daughters and sons-in-law, Robert Navarro and Paul Fortunato, and her grandchildren: Christopher and his wife, Layne (Wegenast) Navarro, Rebecca Navarro, and Michelle, Paul, Julia, and Joseph Fortunato. Beverly graduated from Vassar College in 1954 with a degree in Political Science. She then received a commission in the U.S. Navy. Beverly and Robert met in Washington D.C., married in 1957, and eventually moved to Madison in 1963. An active member of the community, she was an untiring and well-respected volunteer with the Madison Historical Society, the Women’s League of the First Congregational Church, Friends of the Library, school volunteer, the Connecticut Opera Company, and numerous other organizations. A published author, she coauthored the book, “Madison in the Twentieth Century.” Beverly loved to travel, visiting all fifty states and numerous countries. She loved sewing, quilting, gardening, and most of all, music and opera. Above all, though, what brought her the greatest joy was simply having her family together. A memorial service for Beverly will be held at 10:00 a.m. on Saturday, September 3, at the First Congregational Church of Madison, Connecticut. She will be laid to rest with her beloved husband, Robert, in the Memorial Garden. In lieu of flowers, donations may be sent to the First Congregational Church of Madison (Music ministry) or to the Madison Historical Society.
See more See Less

In Memory of Beverly Jiskra Montgomery