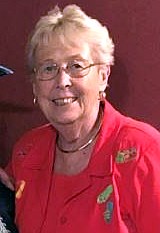 Mary Omohundro Shuman, age 77, of Henrico, Virginia passed away on Tuesday, September 21, 2021. Mary was born in Franklin, NC on March 15, 1944. She was a graduate of John Marshall High School in Richmond, VA. She held administrative positions at the General Assembly and Rudlin Torah Academy. Mary was a member of Heritage Jr. Woman's Club and later joined GFWC Kanawha Woman's club where she served as President 1982-1983 and 2004-2006. She also was GFWC Lee District President from 1988-1990. She was involved in many worthy charitable projects during her years in club work. She was a loving wife, mother, grandmother, mother in law, aunt, cousin and friend to too many people to name. Mary enjoyed summers at Lake Gaston and travelling with her family and friends. She is survived by her husband of 57 years, Charles Carter Shuman; two children, Randy Shuman (Debbie) and Karen Shuman Goode (Marty); and one granddaughter, Kaitlyn Goode Burt (JJ). A visitation for Mary will be held Tuesday, September 28, 2021 from 10:00 AM to 12:00 PM at Woody Funeral Home-Parham, 1771 North Parham Road, Richmond, VA 23229. Following the visitation will be a graveside service at 2:00 PM at Hollywood Cemetery, 412 South Cherry St, Richmond, VA 23220. The family would like to express their thanks for the wonderful help and care given by Hospice of Virginia. In lieu of flowers the family requests memorial contributions be made to Hospice of Virginia by calling them at (804) 281-0451. Fond memories and expressions of sympathy may be shared at www.woodyfuneralhomeparham.com for the Shuman family.
See more See Less

In Memory of Mary Omohundro Shuman