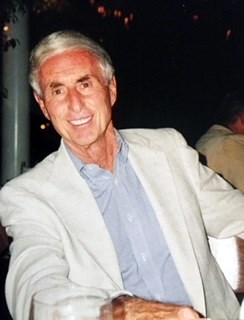 Raymond Hartwell Anderson, Jr., “Sonny” of Tustin, California and formerly of Staunton, Virginia, passed away peacefully in his home on January 6, 2018, with his family by his side. He was 85 years old. He was born in Staunton on February 25, 1932, son of the late Raymond Hartwell, Sr. and Virginia (Moseley) Anderson. Raymond grew up in Staunton, and had many fond memories of this special little town. He attended Virginia Tech University, where he obtained both a BS and an MS in Metallurgical Engineering, and also taught Metallurgical Engineering at Tech as an Assistant Professor. Raymond belonged to a variety of organizations and clubs such as, Tau Beta Pi, Alpha Sigma Mu, Sigma Gamma Epsilon, the Virginia Tech German Club, and the ROTC of Virginia Tech to name a few. He was also a member of the Augusta Military Academy and was with the Army Ordinance from 1954-1956. He served the United States honorably, attaining the rank of 1st Lieutenant during the Korean War. As one of the top ROTC candidates at Virginia Tech, he became a member of the Scabbard and Blade Military Honor Society, which is dedicated to redefining the standard of excellence for ROTC. Raymond moved to California from Virginia and worked with McDonnell Douglas, where he dedicated most of his career as the Section Chief and Specialist in Materials and Process Engineering. He also worked as a Specialist in Failure Analysis in Fort Worth, Texas, and in the Atomic Energy Division in Lynchburg, Virginia. Raymond developed several patents while employed at McDonnell Douglas and even helped develop a part on the Space Shuttle! After retiring, Ray enjoyed consulting with Boeing Aerospace, and teaching as an Associate Professor of Materials and Chemistry at the University of California, Irvine. Raymond was a lover and teacher of tennis! He enjoyed golf, football, gardening and keeping fit. As an alumnus of Virginia Tech, he was their #1 fan and enjoyed reciting the “Old Hokie” Cheer. He loved all animals and will forever remember his dogs, “Max” and “Cooper.” He also loved Jazz and collected Big Band music. Left to cherish his memory are his daughters and their spouses, Kathryn Hartwell Warner and William of Huntington Beach, California, Margaret Bratton Brutocao and Roberto of San Juan Capistrano, California, and Susan Elizabeth Barnett and John of Newport Beach California; grandchildren, Bryan, Kyle, and Carey Warner, Morgan, Chasen, and Gianna Brutocao, and Hunter and Blake Barnett; great-grandchild, Axel Warner; brother, Walter and Brenda Anderson of Afton, Virginia; Randolph Anderson of New York; and the mother of his children, Dana Bratton Wilson Anderson formerly of Staunton. A private service with military honors will be conducted at Thornrose Cemetery. Arrangements have been entrusted to the Staunton Chapel of Reynolds Hamrick Funeral Homes. Relatives and friends may share condolences and memories online with the family by visiting www.reynoldshamrickfuneralhomes.com.

In Memory of Raymond Hartwell Anderson