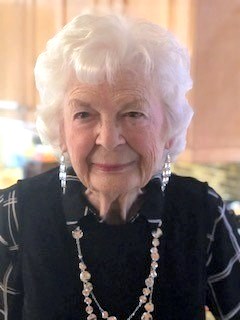 Roseman Puckett Adams of Virginia Beach, VA passed away on September 20th, 2022 at the age of 91. She was born on December 19th, 1930 in Clayton North Carolina to the late Ashley H. Puckett and Daisy Jones Puckett. She graduated from High School in Wilson Mills, NC class of 1949. She was married to William Lee Adams in Bethesda Baptist Church in Clayton, NC which lasted 52 years until his death in 2001. They later relocated to Virginia Beach Virginia in 1955 and that was their forever home. She was a long time member of Haygood Methodist Church. In 2017, after declining health problems, her son Roger Adams graciously invited her to share his home and has taken good care of her ever since. She is predeceased in death in addition to her parents by her husband, William Lee Adams, her son Russell C. Adams and her brother Joseph Clayton Puckett. Survivors are son Roger D. Adams of Virginia Beach, her sister Shirley P. Watkins of Clayton NC, Grandchildren Russell C. Adams Jr. of Atlanta GA., Jeffery S Adams of Wilkesboro NC, Kyle G. Adams of Seattle Washington, Sydney Dawn Adams of Virginia Beach and Chelsea Dale Adams of Virginia Beach. Great grandchildren, Mitchell, Michael, Sara and Seth and two great great grandchildren. A graveside service will be held on September 30th at 2:00pm. at Rosewood Memorial Park, followed by a visitation gathering at the home of Roger Adams. A special thank you and dearest love to Roger’s girlfriend, Bonnie Papenhausen for her undying love and support for Roseman, especially through this difficult time. In Lieu of flowers, please send donations to the food pantry at Haygood Methodist Church. 4713 Haygood Road, Virginia Beach, Va. 23455. A Quote By Roseman Adams – “Do Not Regret growing old. It’s a privilege denied to many….”
See more See Less

In Memory of Roseman Puckett Adams