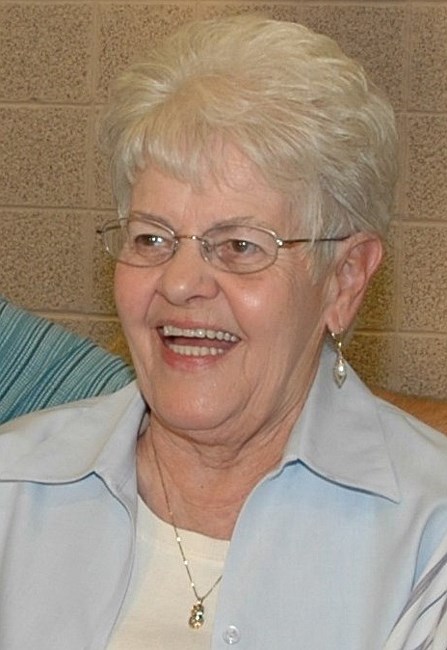 Patricia Anne (Holbach) Hill was born in Minot, North Dakota, the daughter of Frank Peter Holbach and Ruth Alice (Jones) Holbach. She attended rural school until high school, then attended and graduated from St. Leo's Catholic High School. After graduation, she attended nursing school and became a registered nurse. Patricia was united in marriage to Donald Arthur Hill at St. Leo's Catholic Church in Minot, North Dakota. Patricia and Donald made their home in Cedar Rapids, Iowa where she became a full time mom and homemaker. They were blessed with four children; Deborah, Douglas, Mary Kay, and Michael. Patricia firmly believed that everything was better homemade, including her daughters' dresses and all meals served. A backyard garden yielded vegetables, so canning and freezing were a part of summer activities. She became a 4-H leader and shared those skills with others. The years raising her children included lots of picnics and canoeing, along with loading four kids in a station wagon for summer vacation camping adventures. Once all the children were in school, Patty resumed her nursing career at a nursing home in Marion, Iowa and at Collins Rockwell in Cedar Rapids. Don's job took them to Florida for six years, then to Plano, Texas. Patty was a member of St. Jude Catholic Church and was actively involved, serving in the Bereavement Ministry and enjoyed volunteering whenever possible. After retirement, Patty and Don enjoyed traveling, both touring the country in their motor home and visiting more far away destinations; Hawaii, Germany, Ireland, Alaska, and the Canadian Rockies. Patty was also known for her baking. The grandchildren remember with glee being asked what their favorite cookie was. Instead of choosing from the list, Patty would make them all! Patricia passed away peacefully with Mary and Mike at her side. She was preceded in death by her husband, Donald Hill; parents, Frank and Ruth Holbach; in-laws, Arthur and Alice Hill; sister, Mary Ruelle and her husband James; nephew, Patrick Ruelle, and daughter-in-law, Michelle Hill. Left to cherish her memory are her four children: Deborah (Randy) Anderson of Cherokee, Iowa; Douglas (Carol) Hill of Palm lay, Florida, Mary Kay Hill of Williamsburg, Virginia; Michael Hill of Melbourne, Florida; seven grandchildren, Amber (Titus Klinge) Anderson, Nathan (Sarah) Anderson, Ashley (Adam) Parcel, Abigail (Brett) Walker, Chelsea (Sean) Suggs, Eric Hill, Shane Hill; six (almost seven!) great grandchildren, Elijah Mba, Fletcher Anderson, Finn Anderson, Hallie Parcel, Lily Walker, Hudson Suggs, and baby Parcel in February; three sisters, Karen (Jim) Steffen, Laverne O'Neill, and Diane (Roy) Hyslop; one sister-in-law, Carol (Ken) Deal, along with many nieces, nephews, extended family, and friends. In lieu of flowers, please consider a memorial donation to the Williamsburg House of Mercy or your favorite charity.
See more See Less

In Memory of Patricia Anne Hill