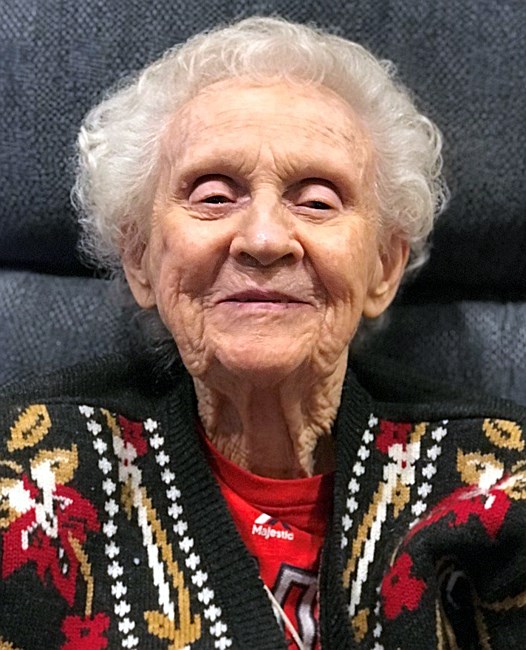 Daisy Esther Dickenson Dobeck passed away on September 23, 2022 in Arlington, Virginia at her home at The Jefferson, where she was a charter resident and had happily lived for 28 years. She was 99 years old. Born in west Texas to E.P. ‘Jack’ Dickenson and Cora Beatrice Pierce Dickenson, she grew up on a cattle ranch in eastern New Mexico where she much preferred helping with outside work—herding, branding, riding the fence lines—rather than learning to cook, can, and sew. She cherished her six siblings and as the oldest, she felt responsible for each. Jackie, Mary Lou, Dorothy, Jim and Herb died before her. She grew up to be a determined, independent, and stoic woman, but everyone commented most on her positivity and warm heart. She attended Eastern New Mexico University (1941-42), the University of New Mexico (1944-47), and New Mexico Highlands University (1950-52). She taught business education for 40 years. She married Rudolf John Dobeck, a fellow teacher at New Mexico Highlands University in 1952 and as they moved for his retail executive career to Albuquerque, Denver, Los Angeles, New York, Cincinnati, and Boston, she taught variously at high schools or colleges in her communities, including rural high schools in Carrizozo and Tucumcari, New Mexico, at Central and Valley High Schools in Albuquerque, West High in Denver, Fullerton (CA) Junior College (now Cal State Fullerton), Norwalk and Darien Connecticut public schools, and the University of Cincinnati. She retired from Fisher Junior College in Boston in 1986 and moved to Arlington, Virginia to be closer to family. After more than 63 years of marriage and years of her love, attention and care, her husband Rudy died in 2016. Her ‘baby’ sister E.P. Scott and brother in-law Helmut (Mac) Dobeck survive her. She also leaves three children and their spouses: Attorneys Robert Bradley Dobeck and Weili Cheng of Arlington, Drs. Victoria Jane Dobeck Davey and Richard Davey of Bethesda, and a daughter and her husband Neil David Pearson. Her six grandchildren were a source of immense pride as she celebrated milestones and graduations from nursery schools through college, graduate, and professional schools, success in careers, and weddings. Dr. Dylan Frances Davey (Air Force Major Christopher Lester), Stephen Cheng Dobeck (Dr. Shikha Sheth), Dr. Carl William Pearson (Dr. Amanda Pearson), Neil David Pearson, Lilli Pearson, and Dr. Emma Leigh Davey have felt their grandmother’s love, strength, and support for all of their lives. In the last year she was overjoyed with the births of two great-grandsons, Spencer James Pearson and Theodore Kelly Lester. She also had 23 nieces and nephews—she recorded all of their births, marriages, and children’s birth dates on a calendar she kept on her wall and ritually reviewed at the beginning of each month. She loved football and baseball--her fierce team allegiances switched from the Bengals/Reds to the Patriots/Red Sox to the Redskins/Nationals as she and Rudy moved. Unless her family needed her, her life revolved around their game schedules. She loved to dance and jitterbugged and line-danced well into her nineties. And she very much appreciated when visitors brought her absolute favorite foods—watermelon and dark chocolate—during her later years. She was proud of her heritage—her forebears were 17th century settlers to Massachusetts and Virginia and she was a descendant of Patrick Henry, governor of Virginia, member of the Virginia House of Burgesses, and patriot orator of ‘give me liberty or give me death’ fame. Daisy’s ashes will be placed at the columbarium at Arlington National Cemetery alongside Rudy’s. A memorial service is planned for Spring 2023. Daisy would ask that, in her memory, you do something kind for someone else.
VER MÁS VER MENOS