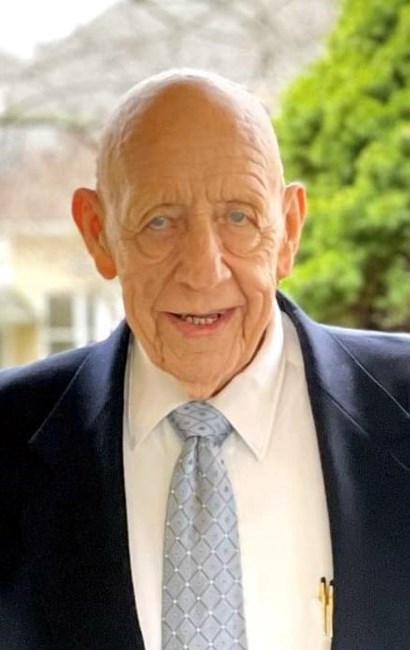 On April 27, 2022 in Fort Belvoir, Virginia, James McKay "Kay" Greer peacefully left this world just shy of his 90th birthday.Born on May 16, 1932 in Hazard, Kentucky, Kay led an extraordinary life, including a career of service to his country inthe Air Force. To say Kay was a man of many talents is understatement in the extreme: his basso profundo voice wowed listeners whether he was singing Handel or Gilbert & Sullivan, church hymns or Broadway show tunes. He could bring folks to tears reading scripture or knock them out of their chairs with hilarious stories. When he was barely more than a kid he drove trucks on the narrow and treacherous mountain roads of his Appalachian home (and later terrified his children on visits to the grandparents by driving the family car like a wild man on those roads, which were now "easy" because hey, now there are two lanes!) He was a High School Kentucky All-Star in basketball and played college ball with such fearlessness that -- though he was the shortest guy on the team at 6'5" -- he dominated his opponents and even christened the brand-new floor of the Western Kentucky University gym with blood from his battle injuries (much to the ire of his coach, the famous E.A. Diddle: “Get offa my floor, Greer! Ya gettin’ blood on it!”). Even Kay’s “failures” turned out to be successes: the vintage 1957 MG Sports Sedan in the carport he worked so hard to rehabilitate wound up a fantastic fort for the neighborhood kids, complete with tie-dyed curtains in the car windows. Upon graduating Western in 1955, Kay enlisted in the Air Force and married his true love, Mary “Way” Drew Greer. “Way & Kay”, as they were known to all their friends, spent a loving and adventurous 64 years together until her passing in 2019, raising their children, traveling from one military assignment to the next, and eventually welcoming grandchildren and great-grandchildren into the family. Kay loved to fly. He started his Air Force career in Texas training to fly the Piper cub, the T-6 Texan, and the B-25. After a Jet Qualification course in 1959 (which he nearly didn’t pass when the tower announced to him over the radio that his new baby boy had just been born), he went on to fly the B-52, the plane that would be central to the remainder of his Air Force career. He then became B-52 Aircraft Commander at Westover AFB in Massachusetts and was in the air during the Cuban Missile Crisis. He became B-52 Aircraft Commander, B-52 Instructor Pilot, FB-111 and T-39 Aircraft Commander, and Air Operations Officer at Carswell AFB, Texas. In the early 1970’s he became a B-52 Squadron Commander at Barksdale AFB, Louisiana, from which he and his squadron were briefly deployed to Andersen AFB in Guam. After that was Kay’s first Pentagon assignment, as a Division Chief for the Deputy Chief of Staff for Plans and Operations. His team worked on “special projects” in a nondescript vault in the basement, the directions to which included “… just past the purple water fountain.” (He would always grin when he mentioned that storied landmark in the bowels of the giant building.) He returned to the Pentagon in 1979 as an Officer, Joint Staff after an assignment as Wing Commander of the 509th Bomb Wing at Pease AFB, New Hampshire, which housed KC-135s and FB-111s. On June 30, 1985 Colonel Kay Greer retired as Chief of Staff, Headquarters 8th Air Force at Barksdale AFB, Louisiana after 30 years, 1 month and 22 days of service. He went on to a second career in the aerospace industry until his final retirement, as a Test Conductor for the B-1 Lancer at Rockwell International and a Manager for the B-2 Spirit stealth bomber at Northrop Grumman. Despite his storied career, intellectual brilliance, and staggering talents, Kay was the warmest and humblest of men. He lived a life of service not only to his country but as a decades-long Presbyterian Elder in the church, always alongside his beloved Way who served as office manager/secretary of their church for twenty years. His humor, caring and sincerity charmed everyone he met, and humble Kay was the only one surprised that everyone seemed to love him. He walked through life in a constant state of wonderment for all the blessings he received from God, whom to the very end Kay faithfully loved with all his heart and all his soul and all his strength and all his mind. Kay was predeceased by his parents Harry E. Greer and Mary Lee Harned Greer and his siblings Margaret E. Greer, Harry E. Greer, William H. Greer and Perry L. Greer. He is survived by his children Lori Greer Rossett (Rickey), James McKay Greer, Jr. (Denise), Julia Drew Greer, John Lincoln Greer (Jenny); his niece Cindy Drew; and his 14 grandchildren and 6 great-grandchildren. A memorial will be held at The Fairfax, a Sunrise Senior Living Community where he and Way were surrounded by dear friends, 9140 Belvoir Woods Parkway, Fort Belvoir, VA 22060 on June 4, 2022 at 11:00 am, with another to follow next year at Arlington National Cemetery, date and time TBA. In lieu of flowers, donations may be made to the Red Cross or Compassion International.
See more See Less