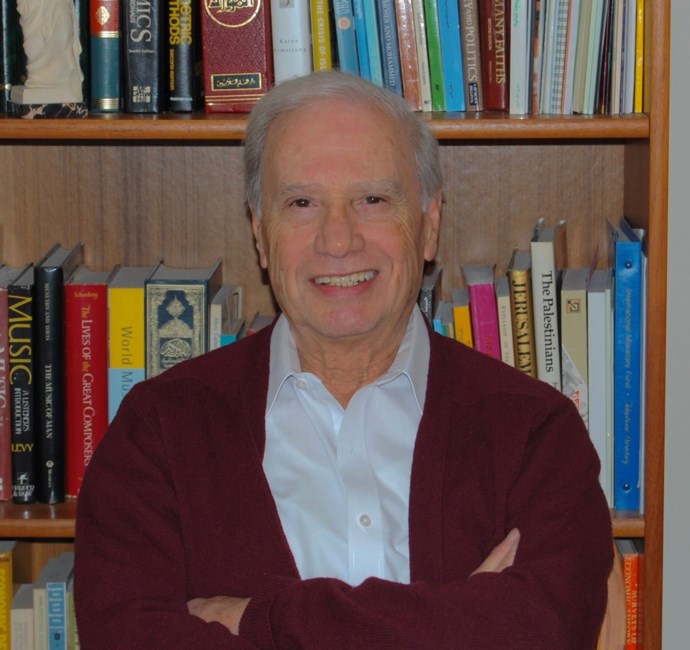 Taher Dajani, age 88, passed away peacefully at his home in Waynewood, Alexandria, Virginia on December 22, 2021 surrounded by his loving family. Taher was born in Jaffa, Palestine in 1933. He came to the United States in 1955 with only $300 in his pocket. He enrolled in DePaul University in Chicago and worked his way through college and graduate school. He went to join his parents in Libya in 1961 where he worked as an economist with the Central Bank and in 1964, he was offered a job as an economist with the International Monetary Fund in Washington, D.C. He worked with the International Monetary Fund for 30 years, becoming a division chief, serving as the resident representative in Liberia for two years and the resident representative in Afghanistan for two years, and being published in his field. Taher met his beloved wife Sheila on the beach in Libya in 1962. Sheila was born in London, England, and was working in Libya when they met. They married in 1964 and settled in Alexandria, Virginia. Taher and Sheila lived an amazing and inspiring life together, raising their two children Amira and Zena and traveling extensively across the world. They had been married for 57 years at the time of Taher’s passing. Taher documented his life and his love for Sheila and his children in his memoir, From Palestine to America, which chronicled his escape from Jaffa in 1948, his life in Syria and Libya as a refugee, his college student years in Chicago, and his work with the International Monetary Fund. Taher had a zest for life, a never-ending quest for knowledge, and a wonderful sense of humor. He loved sharing stories with his children throughout his life and frequently had them in peals of laughter as he recounted his stories and his wisdom. He was an accomplished violinist – oftentimes practicing in his study while he watched the children playing on the field across from his home. He played with several community orchestras and oftentimes delighted his family and friends by playing duets with Sheila accompanying him on the piano. He was also an active member of the Alexandria Lions Club for many years, including serving as President. Taher had been a resident of Waynewood since 1966 and was active in the community, serving two terms as treasurer with the Waynewood Citizens’ Association and the Waynewood Recreation Association. He remained dedicated until the end of his life to swimming laps in the pool and walking in the community and always stopped to chat with everyone he met. This made him a truly treasured member of the community, especially with the children he always took the time to talk with. Taher is survived by his wife Sheila, his daughter Amira (Mike) Fox, his daughter Zena (Barry) Liner, his grandchildren Erik, Alyssa, Scott, and Drew, his step grandchildren Matthew and Kaitlin, his sisters Khawla (Tawfik), Salwa and Bashira, his brother in law Chris (Jenny) Whitehead, and loving nephews and nieces all over the world. A memorial for Taher will be held on Monday, December 27th at 4pm at Demaine Funeral Home in Alexandria, Virginia. In lieu of flowers donations may be made to the United Palestinian Appeal or the American Cancer Society. Fond memories and expressions of sympathy may be shared at demainefuneralhomes.com
See more See Less

In Memory Of Taher Dajani