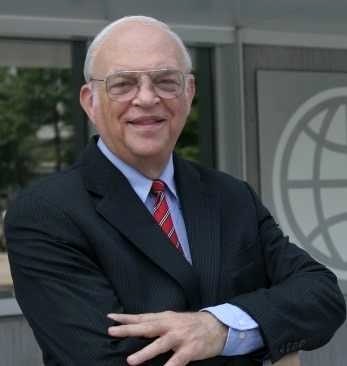 Andy Spanogle's life centered on bettering the lives of others, including as a law professor, a cheerleader for higher education and an advocate for consumer protection. As a teacher, he led what became the new field of international business law; he contributed to the education of many; and working with legislators, he gave us all relief from lost or stolen credit cards by establishing the $50 maximum penalty. He proudly served for decades as a lay minister in his church. For fun he enjoyed travel, storytelling and using his deep bass voice to reach our hearts with song. He died at home of heart failure on his 86th birthday, Friday, Dec 18, 2020. After his birth in Newport News in 1934, Andy's parents moved several times. He attended Oakwood High in Ohio, competing in the national finals for the debate team. Moving again, he graduated from Sewanee Military Academy in Tennessee. He went to Princeton for college, supported by a Navy ROTC scholarship. After graduating he went to law school at the University of Chicago. With his JD degree, he took an academic law position at UC Berkeley, followed by Vanderbilt. He later joined the founding faculty at the new University of Maine Law, then went to the University of Buffalo Law and finally stayed 24 years at George Washington University Law, where he was honored to serve as the William Wallace Kirkpatrick Endowed Chair. While teaching, he coauthored seminal textbooks, and served for the United Nations, including being a delegate for seven years for the UN Commission on International Trade Law. Andy was one of the original Nader's Raiders and after retiring from GW as a professor emeritus, he helped fund the DC office of the National Consumer Law Center (NCLC), which is now named for him. He served on the NCLC Partners Council and in 2020 was awarded a Lifetime Achievement Award from the 15th International Conference on Contract Law. Andy met undergraduate Pamela Cook at the University of Chicago. They married and had two daughters, Kathryn Spanogle and Sharon Spanogle, and two grandchildren, Grant (d.2012) and Scout Learman. Andy's offspring benefitted from his love, generosity and Winnie the Pooh stories. He also had an older sister Lee Shipman (d.2014), who added three nieces and a nephew to his life. His wife and children often spent months living abroad when he worked in Egypt, China, Australia, and France. His wife died in 2005 after a long illness. During that time he attended and helped run a caregivers' support group. He chose to support the nursing school education for Pam's favorite aide and established the Pamela Cook Spanogle Endowment to sponsor the GW Law students who, after winning on-campus, compete abroad in an international commercial arbitration. Andy later met and married Dr. Karen Bennett, a widowed scientist and a professor emerita. Their union brought along three step-children and seven grandchildren. Perhaps not surprisingly, Andy established college savings plans for these grandchildren as well as his own. Since Karen's professional life had left little time for foreign travel, Andy took her to explore some of his favorite places including Paris, Florence and Rome, even when he had to bring his home dialysis machine along. He also became a major supporter of the Society for Developmental Biology's Choose Development! program, which provides mentoring and experience in research labs to promising undergraduate minority students. Throughout his life Andy was active in the Episcopal Church starting with lay reading as a teen and even working as an itinerant preacher for small parishes while at Princeton. After settling in Arlington and choosing St. John's Episcopal Church, McLean, he again read and distributed communion. Andy's bass voice was distinctive and he loved music. He was a drum major in high school, danced and sang in Triangle, Princeton's satire group, and in Hexagon, a similar group, here. He sang with the Alexandria Singers that toured Russia and was a member of the Congressional Chorus. He and Karen sang in the NoVA Lights Chorale, and were always honored to sing with St. John's Choir, when able. His ability to hit a low D should come in handy with the celestial choirs when he's not watching Star Trek! When Covid rules permit, a memorial service will be held at his church. Donations to an area food bank would be a kind tribute in these trying times. Posting memories of Andy is encouraged at www.murphyfuneralhome.com
See more See Less

In Memory Of John Andrew Spanogle