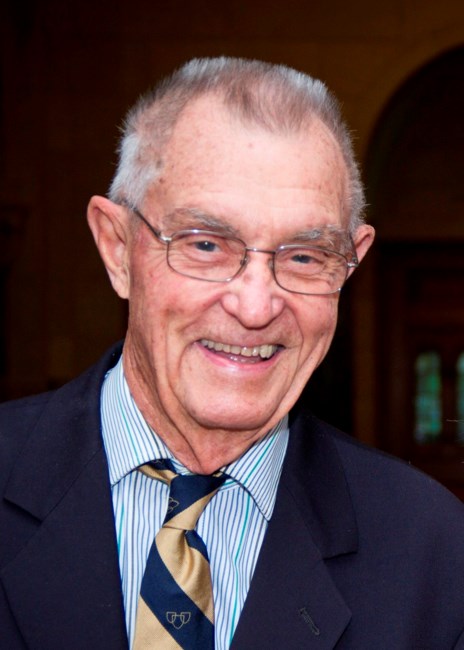 Passed away on August 6, 2011. The beloved husband of Helen Romness for 64 years; father of Nancy (Brad) Currier and Peter (Suzanne), David (Karen), Mark (Christine) and Paul (Bridget) Romness; grandfather of 15 wonderful grandchildren and great friend of many around the world. Memorial service will be held at Georgetown Presbyterian Church, 3115 P Street Northwest, Washington D.C. on Wednesday, August 10, 2011 at 1 p.m. Reception to follow at Washington Golf & Country Club. In lieu of flowers and gifts, memorial contributions can be made to the Mayo Clinic in Rochester, MN, Georgetown Presbyterian Church in Washington, DC or Virginia Hospital Center in Arlington, VA. Arrangements under the direction of Arlington Funeral Home, Arlington, VA. Joseph Oliver Romness was born on March 27, 1923 in Belgrade, Minnesota, the only child of Peter and Anna Romness. He died in Arlington, Virginia on Saturday, August 6, 2011. Joe attended Belgrade High School, St Olaf College and John Carroll University, as well as serving in the U. S. Navy, prior to enrolling in the Medical School at Northwestern University in Chicago, Illinois. It was there that he met the love of his life, Helen “Honey” Meyn, a nurse from Wesley Hospital. They were married in Chicago on September 6, 1947 during medical school, spent a year in Louisville, Kentucky with the Navy, and moved to Rochester, Minnesota in 1950 to begin his orthopedic residency training at the Mayo Clinic. He began his practice in Washington, D.C in 1955 and was on the staff of the Virginia Hospital Center for 35 years. He was a Clinical Associate Professor of Orthopedic Surgery at Georgetown University as well as serving on many boards, including the American Academy of Orthopedic Surgery, the Washington Orthopedic Society, the Virginia Orthopedic Society and the Arlington County Medical Society. He was a founding member of the Eastern Orthopedic Association, serving as its President from 1973-1974, and loved playing clarinet in the EOA Jazz Band. He was President of the Mayo Clinic Alumni Association from 1995-1997 and proudly wore one of his many Mayo Clinic ties whenever he had the chance. He became a member of Georgetown Presbyterian Church in 1955, became an Elder in 1963, and was an active member for the past 56 years. He particularly enjoyed the music program, Sunday school classes, making lifelong friends and the many wonderful pastors over the years. Joe loved golf and the ones he shared it with. It gave him the opportunity to practice honor, respect, and patience for the game and those he cared so much about. For all his golfing friends- please know that he would have loved to join you for one more round. His loving wife Helen, his children, Nancy Currier (Brad), Peter (Suzanne), David (Karen), Mark (Christine), Paul (Bridget), and his grandchildren, Sarah Lieder (Phil), Michael, Tom, David, Andie, Erin, Colin, Joey, Nicole, Daniel, Anna, Will, Jane, Bergen and Hayden will all cherish memories of him as a wonderful, generous, and loving friend to all.
See more See Less

In Memory Of Joseph O. Romness