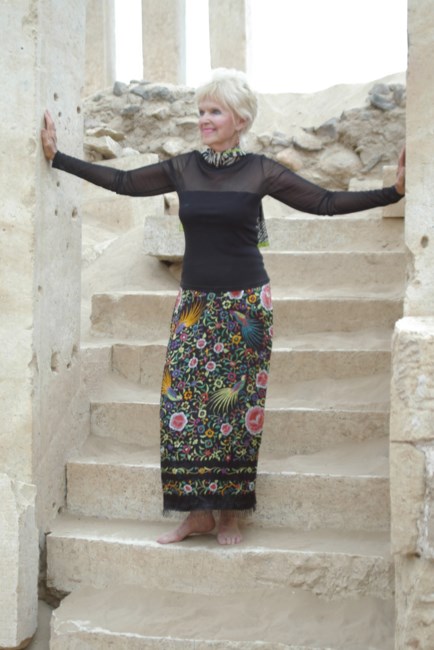 On December 29, 2019 Merilyn Phillips Hodgson passed away peacefully at her home in Falls Church, Virginia. Merilyn was born in Concord, California and was a graduate of the University of California, Berkeley with a bachelor's degree in art history. She exercised her artistic gifts through paintings of her lifelong travels to over 100 countries and in designing her residences in New York, Virginia, and Florida. She was predeceased by her mother, Sunshine Chrisman Phillips; father, Merley Henry Phillips; brother, explorer and expedition leader, paleontologist, and geologist, Wendell Gilbert Phillips; and by her husband, who had been the Commanding Officer of the USS Roosevelt, Captain Gordon S. Hodgson. In May of 2019, she lost her longtime friend, Alina Andrea Ferreira. The non-profit American Foundation for the Study of Man (AFSM) was envisioned, founded, and incorporated by Wendell in 1949 in Washington, D.C. It allowed his dreams of exploration of the origins of man to become a reality. With his untimely death the AFSM faded into the background until his younger sister reactivated it in 1980. Continuing Wendell’s legacy, Merilyn assumed the leadership and became its president until her passing last month. The work of the AFSM became her passion and the organization maintains a concession at the Mahram Bilqis/Awam Temple in Yemen to this day. She led multiple field expedition teams to Yemen which revealed many important discoveries of the region for worldwide benefit. In 2013, on behalf of the AFSM, Merilyn gifted a large number of the important artifacts discovered by Wendell and his team to the Smithsonian Freer/Sackler Gallery of Art, with the intention that they would facilitate the educational opportunities afforded by this unique collection through displays, tours, and talks. The legacy of Merilyn’s life of art, discovery and exploration will continue through the AFSM. She is survived by her cousins Linda Wagner of Illinois, Noble Merley Phillips of New York, Joy Last of Virginia, and Niles Phillips of Pennsylvania; Godson, Tony Ferreira of Redmond, Washington; friend, Zaydoon Zaid of Falls Church, Virginia; stepchildren, Tim Hodgson of Santa Barbara, California, Tricia and Tad Hodgson, both of La Jolla, California; her beloved cats Qataban and Sheba; and many close friends worldwide. An informal visitation for friends, admirers and associates of Merilyn will be held from noon to 4 p.m., Sunday, January 12, 2020 at Murphy Funeral Home, 4510 Wilson Boulevard, Arlington, VA 22203. Burial will take place in Lafayette, California later where she will be interred in a family cemetery. In lieu of flowers, donations may be made to the American Foundation for the Study of Man, PO Box 2136, Falls Church, VA 22042.
See more See Less

In Memory Of Merilyn Phillips HODGSON