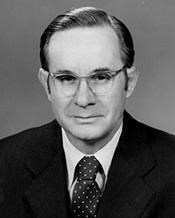 Robert Lloyd Funseth died September 25, 2015 at the Virginia Hospital Center in Arlington. Robert Funseth was Spokesman of the State Department during the tenure of Secretary of State Henry Kissinger. He was predeceased by his wife, Marilyn, and only child, Eric Christian Funseth.

Robert Funseth was born on May 10, 1926 in International Falls, Minnesota and raised in West Seneca, New York in the hamlet of Ebenezer (a suburb of Buffalo) with his father (Martin Emanuel), mother (Agnes Evangeline Guibault), and brothers Edward (late) and Denis. Robert graduated from Ebenezer High School in 1943.

In 1943 Funseth was assigned to the U.S. Navy V-12 unit during World War 2. After his commissioning as an ensign and service with the Pacific fleet, he graduated from Hobart College. At Hobart he was a student, a newspaper editor and a charter member of the group of sailing enthusiasts.

Robert Funseth embarked on a 40-year diplomatic career serving at American embassies, consulates and on diplomatic missions in the Middle East, Europe, Asia, Africa, the Western Hemisphere and the United Nations. He was the spokesman for the State Department in the 1970s and during his last ten years there, Funseth managed the worldwide U.S. refugee program.

For his humanitarian achievements, including pioneer work on behalf of refugee women and children, improving refugee mental health and negotiating the release of tens of thousands of political prisoners, Robert Funseth received three Presidential Foreign Service Honor Awards, the Distinguished Honor Award, and, upon his retirement in 1991 from the Foreign Service, the Wilbur Carr Distinguished Service Award.

Robert Funseth has served as a Woodrow Wilson Visiting Fellow lecturer and student counselor, and as a member of the Episcopal World Relief board. In 1978, he was awarded the honorary degree Doctor of Laws by Hobart College.

In Memory Of Robert Lloyd Funseth