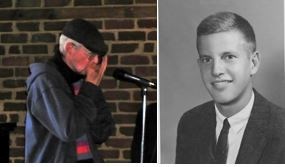 Robert Saunders Blake, age 78, passed away on Friday, July 29, 2022 after a brief stay in UVA University Hospital. He was born on October 30, 1943 in Richmond, VA to Irvin Norris Blake and Frances Kaempf Blake. He is survived by his brother Irvin N. Blake, Jr. (Susan) of Hampton, VA, his sister Martha B. Rex (David) of Williamsburg, VA., stepbrother Lee Scott Owen, nephews Norris Blake and Blake Rex, nieces Kary B. Stadlin and Jennifer B. Mann and numerous great nieces and nephews. Robert was preceded in death by his parents and step-mother, Martha Scott Blake. Robert grew up spending many happy summers in the Northern Neck at the family cottage, boating, waterskiing, playing golf and hunting. His love for music started in high school when he first played the trumpet and then took up the guitar. He then formed a band with 4 friends, playing parties from Richmond all the way to UVA fraternity houses. Later he worked with his dad for several years in the land development business on projects including Mill Quarter Plantation in Powhatan County. For hobbies he enjoyed dirt track motorcycle racing. Robert struggled with bipolar disorder for most of his adult life but he made many friends along the way and enjoyed playing his harmonica every opportunity he got, playing at Fellini’s and other venues occasionally over the past 30 years in Charlottesville. Music was his joy in life. He occasionally attended First United Methodist and Hinton Methodist and loved singing and playing in their choir. Robert was a very loyal friend and brother, often calling childhood friends he hadn’t seen for years, just to stay in touch. He will be missed by many. His family would like to thank the mental health care workers who provided so much support and guidance to Robert through the years. Your compassion and friendship meant a lot to him and gave him great comfort. There will be a small graveside service at Hollywood Cemetery in Richmond on a later date. You can be sure Robert is now singing and playing his harmonica with the angels.
See more See Less

In Memory Of Robert Saunders Blake