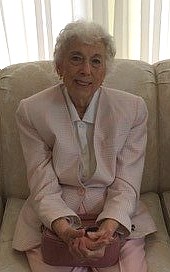 Mrs. Hazel Lillian Shell (Ashby), age 92, of McLean, VA passed away peacefully while surrounded by her loving family on November 5, 2017.

Hazel was the beloved wife of the late James Nathaniel Shell. Hazel was born November 11, 1924 in Atlanta, Georgia, the daughter of the late Frederick William Ashby, Jr. and Margaret Lewis Ashby.

She worked as a cartographer for the Army Map Service of the US Army Corps of Engineers during and after World War II in Indianapolis, IN and Washington, D.C. Hazel later worked as an office administrator for Dr. Mercantini, DDS, of McLean, VA. She was a person of strong faith and a long-time member of Charles Wesley United Methodist Church in McLean, VA where she volunteered as treasurer. Hazel was a member of both the United Methodist Women and the Alter Guild. She also sang in the choir. Hazel had volunteered as chaplin for the American Legion Post 270 in McLean and with the McLean High School Career Center. She was a loving mother and grandmother who had a cheerful, positive outlook on life and always found a way to put others’ needs before her own. Hazel was a compassionate person who showed genuine interest in others in a caring way, and was open minded and considerate of others’ views. She enjoyed reading, gardening, writing short stories, beautiful poems and recording family history.

Hazel was the devoted sister of Alice Roettger of Indianapolis, IN and Frederick William “Bill” Ashby III (deceased). Surviving are her five children; Jackie Roomian of McLean, Wendy Shell of Alexandria, VA, Kirk Shell of Mount Airy, MD, Blair Shell of Midlothian, VA, and Joni Dodd of Sherwood, OR.

She was blessed with seven grandchildren; Graham Shell of Richmond, VA, Amy, Samuel and Lillian Grace Roomian of McLean, Steven and Virginia Shell of Mount Airy, MD and James Dodd of Sherwood, OR.

A Memorial service will be on Thursday, April 12, 2018, 10:00 a.m. at Charles Wesley Methodist Church, 6817 Dean Drive in McLean, VA with a reception to follow. Processional will leave from the church to Arlington National Cemetery by 12:45 p.m.. Everyone planning to attend the comitial at Arlington should meet at the administration building by 1:15 p.m. to prepare for the inurnment at 2:00 p.m.

In Memory Of Hazel Lillian Shell