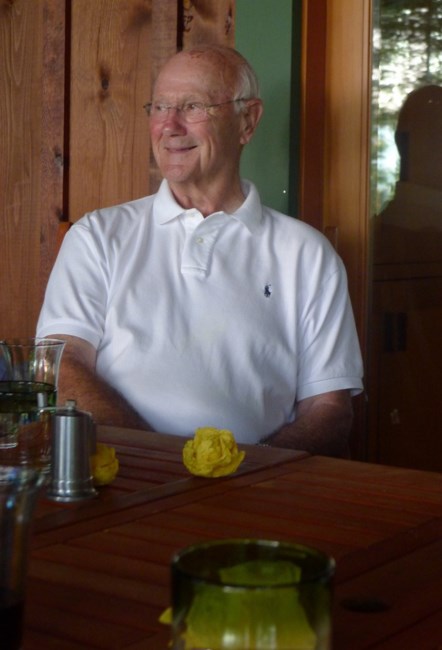 An outstretched hand, a warm smile and twinkling grey eyes greeted all who approached…Jim took the measure of people by the caliber of their response to his genuine openness. James Victor “Jim” Wiley passed away 31 July 2022 at the age of 93 in the Washington, DC apartment with his loving wife of more that 65 years, Lela (“Lee”), at his side. Born in Port Angeles, Washington, Jim grew up in in Bremerton, Washington – a gritty, industrial, town that surrounded and supported a U.S. Navy shipyard of the same name. His mom, Marie Hopkins Wiley, was a Navy visiting nurse, so Jim received a large measure of upbringing at the knee of his grandmother. In his early elementary school years, like many boys in his town, the Warren Avenue Playfield became Jim’s second home. Ultimately from that hard scrapple playground, football became Jim’s passion and path to opportunity. A gifted halfback at Bremerton High School – the leading scorer in Washington State his senior year – Jim was offered and accepted a scholarship to attend and play football at the University of Washington. Playing football developed in him, the values of teamwork, discipline, compassion, and trust that characterized his long and fulfilling life. His arc was defined by love of family, lifelong bonds of friendship, and public service including service in the U.S. Coast Guard. Jim met Lela “Lee” Wiley (née Cherin) at her dad’s Bremerton restaurant in 1955 and they were married 1 December 1956. Lee’s happiness meant the world to Jim. They settled in the Puget Sound area where they raised their two daughters, Barbara and Janice. Jim adored his daughters. Like her father, Barbara graduated from the University of Washington and carries on the proud Husky Football game day traditions. In 1991, Barbara married Kevin Cosgriff – an officer in the U.S. Navy who rose to the rank of Vice Admiral. Jim and Lee warmly embraced Kevin’s three amazing children – Laura, Patrick and Susan. In Janice, Jim had a partner of equal talent and love of tennis. Shortly after he retired, Jim and Lee moved to the Minneapolis area to spend more time with Janice, her husband Dave – a technology executive/entrepreneur – and their then-young son, James. Jim was an avid supporter of his grandson – especially his football years – as James blossomed into high school and adulthood. Jim also enjoyed playing tennis, golf and regular “happy hours” with their wonderful friends. Jim thrived at the University of Washington where he was recognized in equal measure for his contribution to campus life and his contributions on the football field. He was a member of the Sigma Nu Fraternity and was invited to join the Oval Club and Fir Tree – UW Honorary Societies – in recognition of his student activities. But it was on the Husky football field – a three-year football letterman – where he developed a passion for helping others. Jim was the 1951 recipient of the Guy Flaherty Award, the University of Washington football program's oldest and most prestigious team award given to the UW's most inspirational player and voted on by the players. After serving on active duty in the U.S. Coast Guard, Jim returned to the University of Washington as Assistant Athletic Director, working with the football program. In that capacity, in January 1960, Jim and Lee traveled to Pasadena to cheer the Huskies on to a Rose Bowl victory over Wisconsin. Professionally, it was Jim’s tenure as the King County Housing Authority (KCHA) Executive Director (1973-1997) for which he was especially proud and where his leadership and foresight are still making a difference today. During his tenure, the KCHA was repeatedly recognized nationally for the innovative programs Jim and his leadership team developed to address the housing needs of King County. A read of the cover letter he penned for the 1995 KCHA transcends time – “I take a great deal of pride in knowing that King County’s public housing is safe, livable and consistently rated some of the best managed housing in the country. By providing homes and neighborhoods instead of merely shelter, we create strong communities that promote success and growth … I believe people do respond to their environment, so in partnership with local government and human service providers, we provide an array of services such as Head Start schools, ESL classes, computer labs, youth recreation programs and community policing programs, all of which help create opportunities for residents and build safe neighborhoods.” As important, he recognized the need for KCHA programs address diversity and consciously work to ensure KCHA programs “strengthen program diversity” noting that “diversity has become our “business as usual.” In his later years, Jim's idea of heaven was watching Blue Bloods and holding hands with Lee. Jim will be forever loved and missed by wife, Lee; daughters, Barbara (Kevin) and Janice (Dave); grandchildren, James, Laura, Patrick, Susan; 6 great-grandchildren; Sister-in-Law, Peg; and many nieces and nephews. At Jim's request, no services will be held. Jim's family would suggest celebrating his life with a nice glass of chardonnay. Cheers! In lieu of flowers, please consider making a donation in memory of Jim to the University of Washington Husky Football program: Donations can be made online at uwtyeeclub.com, or by check: University of Washington Athletics Tyee Club – Box 354070 Attn: Jim Wiley Memorial Gift Seattle, WA 98195-4070 Or, the SW King County Boys and Girls Club program housed at the Jim Wiley Community Center at Greenbridge. Donations can be made online at positiveplace.org/Wiley or by check: Boys & Girls Clubs of King County 220 W Mercer St., Ste 410 Seattle, WA 98119 Please indicate “in memory of Jim Wiley”.
See more See Less