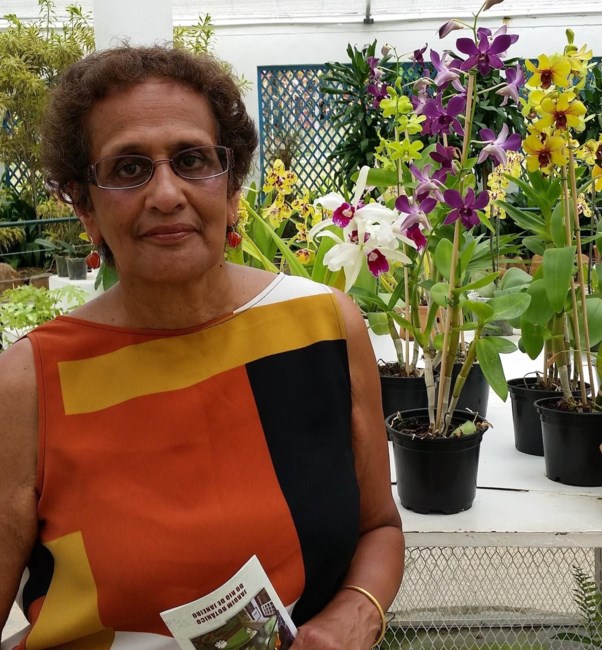 Nivedita (Nita) Ganguly passed away on February 13, 2021 from pneumonia complications following a long, brave fight to recover from a massive stroke. Her immediate family will gather for a private cremation ceremony on Wednesday, February 17. Nita was born to Sushil and Aloka Mitra on February 21, 1946 in Kolkata, India. Education, both her own and of others, was the primary focus of her life. She completed her B.S. degree in Zoology & Comparative Anatomy in 1965, and her M.S. in Zoology & Comparative Anatomy in 1967 at Presidency College, Kolkata. She finished her Ph. D in Genetics in 1973 at the University of Calcutta, Kolkata, India. She received a prestigious fellowship from the U.S government in 1973 to work at the National Institute of Environmental Health Sciences. Nita met Ranjan Ganguly in 1969 and they shared a love for the ages. They were married on December 12, 1976 and moved to Lincoln, Nebraska where their son Tuhin was born in 1979. They spent 6 years in Irvine, California where Nita completed her post doctorate work at the University of California. In 1986, they made Knoxville their home for the next 33 years, where they raised their family and became the surrogate parents for newly arrived Indians, opening their home to anyone in need of community. They led local Hindu festivals and Bengali Cultural programs and hosted epic parties, where you could always count on Nita to dance the night away. She loved music, food, art, good conversation, and travel. Nita & Ranjan traveled the world together, visiting a multitude of countries over 5 continents. In 1992, Nita completed her second master’s degree in Science Secondary Teaching and began her devotion to educating others. Nita was an exemplary teacher. She began her teaching career as a science teacher at Bearden Middle School in Knoxville, TN and then spent 15 years at Oak Ridge High School as an AP Environmental Science and Biology Teacher and Department Chairperson. Nita was awarded a myriad of accolades as a high school teacher, including receiving the Presidential Council of Environmental Education Award and the Siemens Award for the Teaching of Science. In 2007 she testified before Congress on the Nanotechnology in the Schools Act. Nita was an integral member of the College Board for 18 years, and helped develop the AP Environmental Science lab manuals, performance level descriptors, and teacher’s guide, in addition to running workshops to assist other educators around the world with setting up and running AP Environmental Science programs. Nita joined UT-Knoxville in 2010 to launch the VolsTeach Program and her 8-year tenure vastly pushed forward the agenda of increasing the number of STEM educators in the US. She also became the State Director for the Tennessee Science Olympiad Competition and the Junior Science and Humanities Symposium. She never tired of working with young people and watching them become poised, confident educators. In 2018, Nita and Ranjan retired and relocated to Alexandria, VA and found immeasurable joy spending time with their granddaughters. Even in retirement, Nita continued her passion for educating by running the Tennessee Science Olympiad, leading workshops as a College Board consultant, and working as a faculty consultant for STEM Programs at UT- Knoxville. Her excellence in teaching has impacted thousands of students and teachers, and her legacy leaves an abundance of STEM educators better suited to serve our nation’s children. Nivedita was preceded in death by her father Sushil Mitra and mother Aloka Mitra. She is survived by her husband Ranjan Ganguly, son Tuhin (Kara) Ganguly, two granddaughters, Aina & Ayda Ganguly, brother Shankar Mitra, and countless extended family and friends. Nita had a remarkable love for life and she carried a piece of every person she met in her heart. She was an accomplished woman and she would say her greatest accomplishment was knowing and loving each person she met, but especially in caring for her son and granddaughters. She was deeply devoted to the betterment of humanity and her loss will be felt over multiple generations around the world. A Celebration of Life will be planned in Knoxville this summer, pending COVID restrictions. Please email CelebrateDrGanguly@gmail.com to receive details as they become available. You can also share your memories and stories with her family at: www.CelebrateDrGanguly.com In lieu of flowers, please consider donating to the American Stroke Foundation at www.americanstroke.org or the Oak Ridge Public School Education Foundation at www.orpsef.org.
See more See Less

In Memory Of Nivedita Ganguly