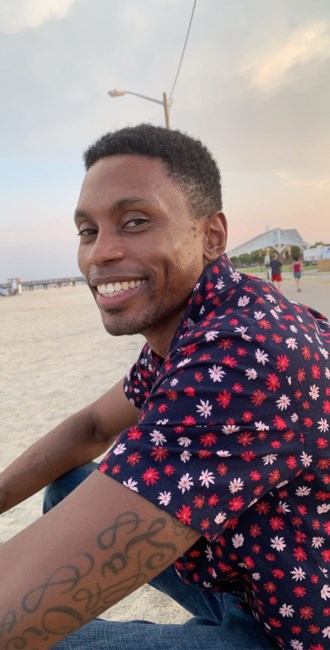 Danny Yves Bellevue, born October 3, 1990, in Boston, MA, and raised in Providence, RI, went to be with the lord on Friday, September 9, 2022. Danny graduated from Hope High School in Providence in 2009, and then attended Wentworth Institute of Technology in Boston, graduating in 2010. Upon graduation, Danny entered the banking industry and worked for Citizens Bank and Metro Credit Union while living in Boston. He started as a bank teller and quickly ascended to the role of branch supervisor during these formative adult years. This experience set Danny on a path to appreciate the value of hard work and sacrifice and served as a precursor to his future success. On January 8, 2013, Danny enlisted in the United States Air Force and began his military career. Upon graduation from basic training and technical school, Danny was assigned to the 497th Operations Support Squadron, Joint Base Langley-Eustis. During this assignment, Danny served as a Multi-Source Analyst, Special Operations Forces Multi-Source Analyst, Training Manager, and Non-Commissioned Officer in Charge of Fusion Evaluations. Danny served during a critical time in United States history and enabled military operations of the Unites States and Coalition Forces across the United States Central Command, European Command, and Africa Command. While assigned to this position Danny achieved the rank of Staff Sergeant. In addition, it was during his time assigned to Joint Base Langley-Eustis that Danny married his wife, Markita. Danny also became a father and shared his love with his children Elijah and Mekhi. After serving honorably for six years, Danny separated from the active-duty Air Force and joined the Virginia Air National Guard to continue his dedicated public service. Danny again pursued new skills and training and was assigned to the 185th Cyberspace Operations Squadron, Virginia National Guard. During this assignment, Danny served as a Cyber Warfare Operator and Non-Commissioned Officer in Charge of Weapons and Tactics. Danny’s leadership proved critical to a unit mobilization in support of the United States Cyber Command in 2021. While assigned to this position Danny achieved the rank of Technical Sergeant. As a drill status guardsman, Danny worked in his civilian capacity for CACI, Inc. In this role, Danny was part of the Air Force Life Cycle Management Center Distributed Ground Station-Experimental team assigned to Joint Base Langley-Eustis. It was Danny’s years of military experience in both the Intelligence and Cyber community that allowed him to effectively lead at the highest echelon and provide real-time monitoring to identify and counter threats and provide guarantees of safe and effective continued operations. Danny was a father, husband, Airman, and hero to so many. He was dedicated to his personal physical fitness goals, enjoyed boxing, and thrived on bringing teams together to tackle the toughest challenges. He was a stellar example of dignity, honor, and pride. His years of selfless service in support of the United States, his family, and his friends will be remembered. Danny is survived by his mother, Marie Dolcine, his father, Craan Bellevue, his two sisters, Pauline Morise and Ashley Leneus, his brother, Keith Bellevue, his wife, Markita Bellevue, and his children Elijah and Mekhi. Danny and Markita spent three years together before getting married in 2017 and having two wonderful kids, a son Mekhi, and a daughter, Elijah. He could not have been a more supporting and loving husband and father. Danny could make friends with anyone, despite his stoic and tough exterior. He was able and willing to help anyone, lighting up a room with his smile wherever he went. Boxing and football were big hobbies of his, often spent his free time watching the New England Patriots. Danny will be greatly missed by his family, friends, and colleagues, he leaves a giant hole in all our hearts and lives, a part of America left with him. A public visitation for Danny will be held Thursday, September 29, 2022, from 5:00 PM to 8:00 PM. A celebration of life will occur Friday, September 30, 2022, from 2:00 PM to 4:00 PM at Parklawn-Wood Funeral Home, 2551 North Armistead Ave, Hampton, Virginia 23666. Fond memories and expressions of sympathy may be shared at www.parklawn-woodfh.com for the Bellevue family.
See more See Less

In Memory Of Danny Yves Bellevue