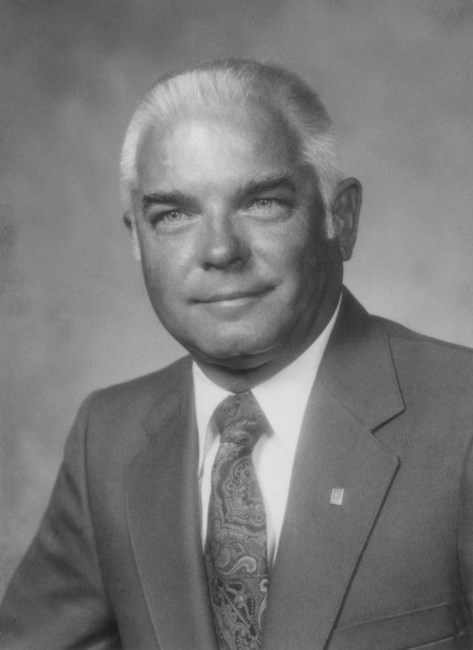 Cmdr. Richard Bond Wampler (USN-Retired), 90, of Harrisonburg, passed over peacefully in his sleep on Thursday, December 24, 2020 at Showalter House of Virginia Mennonite Retirement Community in Harrisonburg, Virginia. Born on February 22, 1930, in Harrisonburg, Virginia, Richard was the only child of the late Clarence Samuel Wampler of Port Republic and Willie Irene "Bonnie" Bond Wampler of McGaheysville. Richard attended elementary schools in Bridgewater and McGaheysville, graduating in 1947 from Elkton High School. He continued his education at Bridgewater College, graduating in 1952 with a BS in Business Administration, Reserve Officers Candidate School in Long Beach, California in 1952, and Navy Postgraduate School in Monterey, California in 1963 with an MS in Management. In 1952, following graduation from Bridgewater College, Richard entered the United States Navy as a commissioned officer (Ensign) and until 1954, sailed the seas aboard the destroyer USS Stockham conducting military business in Korea, Japan, Midway, Guam, and Hawaii. Circumnavigating the world, as part of the United Nations Fleet, he received one of the rarest unofficial United States Navy distinction certificates, Order of Magellan. Richard returned to the Shenandoah Valley in 1954 to work in the banking industry. On April 29, 1957, he married the late Elizabeth Anne Shuler of Elkton at Shenandoah Christian Church in Shenandoah, Virginia. They were married for 54 years, traveled the world together, and upon returning to the Shenandoah Valley, resided in a home they built in Fairway Hills from 1976 until Elizabeth's death in 2012. Richard continued his career in the United States Navy, returning to active duty in 1958, serving at various duty stations: Navy Forms and Publications Supply Office in Byron, Georgia; Robins Air Force Base in Warner Robins, Georgia; Joint Base Pearl Harbor-Hickam in Honolulu, Hawaii; Fleet Activities in Sasebo, Japan; Naval Air Station Oakland in Oakland, California; Naval Support Activity Monterey in Monterey, California; Naval Air Systems Command Crystal City in Arlington, Virginia; Naval Submarine Base in New London, Connecticut; and his last duty assignment and major command at Headquarters Navy Material Command in Washington, DC. In addition to the USS Stockham (DD-683), he was a Supply Corp officer for Naval Surface Forces U.S. Pacific Fleet, USS Ajax (Ar-6), and COMSERVRON 3. He served for 26 years, retiring on June 30, 1976 at the rank of Commander. During his military career, Richard was awarded the National Defense Service Medal with Star, Korean Service Medal and United Nations Medal during the Korean Conflict, and the Joint Services Commendation Medal while serving with the Joint Chiefs of Staff. Richard moved his family home to Harrisonburg in 1976, where he and wife Elizabeth worked in real estate, Richard an Associate Broker and 1982 President of the Harrisonburg-Rockingham Board of Realtors, with Funkhouser and Shomo. In 1987, Richard and Elizabeth established Harrisonburg Real Estate and were in business until retiring in 1992. He was a member of Asbury United Methodist Church, Retired Navy Officers Association, Spotswood Country Club, 63-year member of the Benevolent and Protective Order of Elks Harrisonburg Lodge #450, 63-year member of the Order of Free and Accepted Masons Charles Franklin Shuler Lodge #74 AF & AM in Elkton, and recipient of the 60-year Veterans Certificate and Grand Master Gary Taylor's lapel pin honoring his service of Freemasonry. Richard is survived by daughters, Bonnie Wampler Young of Atlanta, Georgia and Lisa Wampler Ladisic and husband, Michael, of Atlanta, Georgia; seven grandchildren, Megan Elizabeth Young of Northampton, Massachusetts; David Bradley Young II of Colorado Springs, Colorado; Madison Katherine Young of Charlottesville, Virginia; Clara Marie Ladisic of New York, New York; Annie Elizabeth Ladisic of Atlanta, Georgia; Rachel Beatrice Ladisic of Atlanta, Georgia; and Margaret Katherine Ladisic of Atlanta, Georgia; loving in-laws, nieces, nephews, and many long-time friends. At his request, the body was cremated. A graveside memorial service will be held on Saturday, August 7, 2021 at 10:00 am at Mill Creek Church of the Brethren Cemetery, 7600 Port Republic Road, Port Republic, Virginia, where his wife, parents, generations of relatives rest, and grandfather Rev. David H. Wampler ministered. Masonic Rites will be performed by the Charles Franklin Shuler Lodge #74 A. F. & A. M. Military Honors will be performed by the United States Navy. In lieu of flowers or gifts, the family requests memorial contributions be made to an account established to assist and encourage students: Nursing Scholarship, VMRC Foundation Fund "In Memory of Richard Bond Wampler", 1491 Virginia Avenue, Harrisonburg, Virginia 22802. Those wishing may share a memory or an online condolence by visiting www.lindseyharrisonburg.com. Arrangements entrusted to Lindsey Funeral Homes.
See more See Less