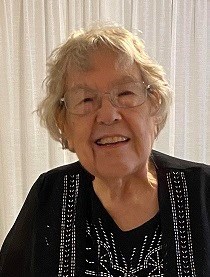 Barbara A. Anderson, 87 of Bluffton passed away on August 28, 2022 at Bluffton Regional Medical Center. She graduated from Wheaton College with a degree in Elementary Education. She taught elementary school in Cicero and Riverside, IL. Barbara took a break from teaching to raise her family. She later became a substitute teacher. She was the Director of Senior Services for Huntington County for many years. Barbara loved to cook and was excellent at it. She was especially known for her Christmas cookies. She was a member of College Park United Brethren Church where she taught Sunday school for over ten years. Barbara was known for her exceptional hosting skills. Whether it was a small family gathering, a holiday celebration with friends and family, or a large Sunday school event, she was the epitome of a gracious hostess. She enjoyed doing crafts, sewing, making centerpieces and artwork. She spoiled rotten her three standard poodles. Barbara was born on September 2, 1934 in Chicago, IL, the daughter of Irvin and Erna (Loboschefski) Davis. She married Willard Anderson on June 19, 1957 in Cicero, IL. He was the country mouse to her city mouse. Willard preceded her in death on September 16, 2020. Survivors include two daughters: Carol Lynn (Michael) McManus of Greenwood, IN, Carla (Travis) Anderson of Santa Monica, CA; two grandchildren: Katelyn McManus and Brian McManus a sister: Joyce Ann (John) Metter of Beloit, WI; a niece: Leighanne Metter-Jensen and three nephews: Andrew Metter and John William Lamiot and James Lamiot. A memorial service will be held on Friday, September 9, 2022 at 11:00 am at the River Terrace Retirement Community Chapel, 400 Caylor Blvd, Bluffton, Indiana. A graveside ceremony and final resting place with Willard will be held in Geneseo, IL on September 10, 2022. Memorial donations can be made out to Pacific Garden Mission and Huntington Food Pantry, Huntington County Humane Society all in care of Myers Funeral Home, 2901 Guilford Street, Huntington, IN 46750.
See more See Less

In Memory Of Barbara A. Anderson