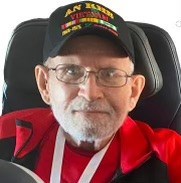 Larry G. Jenks, 78 of Markle passed away on Wednesday evening, August 17, 2022 at his residence. Larry was a 1962 graduate of Huntington High; he played football for the last undefeated, untied team. He was also a member of the YMCA state champion wrestling team. Larry served in the US Army from 1965 to 1967. Upon his return from Vietnam, he was appointed to the Huntington City Police Force for 21 years, retiring in 1988. He also served as a Campus Police Officer at IPFW for 10 years. He also worked as a 911 Dispatcher for Huntington County Sheriff’s Department, retiring in 2005. He was Huntington City Police Departments first K-9 Officer. He was also a lifetime member of the VFW Post 6671 in Markle, and was a Past Commander. Larry was also a member of the American Legion Post 85, Masonic Lodge #483, where he has served for over 50 years. Along with being a member of the Mizpah Shrine and Legion of Honor, Fort Wayne Scottish Rite, Moose Lodge 837 and Markle United Methodist Church. Larry loved hunting, fishing, trapping, trap shooting, and was an avid reader. He had owned Everything that Counts Stitch Shop and Keepsakes Custom Framing, where he was a master framer. Larry also owned and operated D&L Wildlife Removal. He loved Notre Dame Football and the Chicago Cubs. Larry was an avid Jeopardy fan, having never missed an episode. Larry also was very proud to be a Veteran. Larry was born on October 13, 1943 in Huntington, the son of the late Fred and Jane (Knight) Jenks. He was united in marriage to Brenda (Tackett) on February 16, 2013, she survives. Survivors include his loving wife Brenda Jenks of Markle, sons; Brian Jenks of Huntington, Christopher Jenks of Indianapolis and Tristin (Amanda) Tackett of Huntington; a daughter, Tina (William) Hockenberry of Huntington; brother, Mark (Susan) Jenks of Huntington; aunt, Annabeth Johnston of Muncie; 4 grandchildren, Melanie Lynn Jenks of Perry, Georgia, Melissa Elaine Jenks of Fort Wayne, Kaleb R. Tackett of Huntington and Joshua H. Tackett of Huntington; 2 great-grandchildren, Jace Lopez of Perry, Georgia and Olyn Lopez of Perry, Georgia. He was preceded in death by his first wife: Vicki Jenks, his parents; a sister: Karin Jenks and a brother: Wayne (Carolyn) Jenks. Visitation will be held on Tuesday, August 23, 2022 from 11:00am to 3:00pm at the Myers Funeral Home Huntington Chapel, 2901 Guilford Street, Huntington, Indiana. Funeral Services will be held on Tuesday, August 23, 2022 at 3:00pm at the Myers Funeral Home Huntington Chapel. Memorial donations can be made out to the Honor Flight of Northeast Indiana or Markle United Methodist Church both in care of Myers Funeral Home, 2901 Guilford Street, Huntington, IN 46750.
See more See Less

In Memory Of Larry G. Jenks