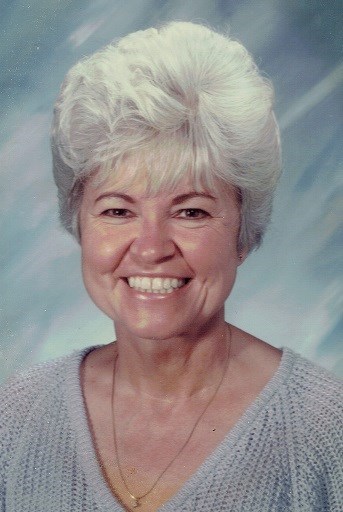 Linda (Wright) Johnston Hazen, 81 of Fort Wayne and formerly of Huntington passed away on May 8, 2022. She moved with her family to Kokomo, Indiana at an early age and attended Kokomo Elementary School, graduating from Kokomo High School and marrying her high school sweetheart Bob Johnston. Following the death of her husband Bob, Linda met Rev. Harold Hazen who had recently lost his wife to cancer and they subsequently fell in love and married. They discovered that Harold’s birthdate and Bob’s were exactly the same and so their marriage theme has been “twice blessed”. Linda was an active member of College Park United Brethren Church in Huntington and sang with The Trinity Trio for many years. She was the youth leader for the Children of Faith and was known for her active evangelical witness for her faith in Jesus Christ and her ready willingness to pray with anyone who asked. Linda was also active with husband Bob in the Huntington Saddle Club, owning several horses, one of which was a beautiful Arabian admired by everyone who saw him. She served for many years as the school librarian at Lincoln Elementary School where she was affectionately known as the “Lovely Lincoln Library Lady”. One of her most important ministries was her several years with Three Rivers Visiting Dogs of Fort Wayne. With her faithful German Shepherd, Rosi, a trained certified therapy dog, she visited multiple nursing homes and hospitals bringing joy and comfort with her usual Christ centered approach. After her marriage to Harold, Linda became a good pastor’s wife as ever there was as they ministered in multiple churches as pastor and wife. Linda’s expressive and out going personality developed close and lasting friendships with everyone. Her gift of being able to pray openly and meaningfully supported Harold not only in their roles as pastor and wife, but also as they engaged alumni and donors in Harold’s role developing resources and funding for several Christian colleges and other Christian Ministries and churches. Together they traveled throughout the United States and even to Scotland and England before she retired to fully engage in her beloved hobby of quilting. Over a 16 year period Linda produced over 100 large king and queen size quilts, 35-40 baby quilts, multiple other projects like table runners, place mats, including a variety of coats and jackets. Indeed, her gifts of hospitality, generosity, friendship and encouragement flourished with Harold through their 33 years of marriage. Linda was diagnosed with Parkinson’s Disease in 2016 and fought bravely against the many accompanying effects until suffering a massive stroke a few days before God took her home. Linda was born in Rector, Arkansas on March 12, 1941 the daughter of Johnie Floyd Mitchell Wright and Gertie Wright. Survivors include her husband: Rev. Harold Hazen, seven children: Robert (Carey) Johnston, Jr. of Huntington, Mitchell (Sherry) Johnston of Chambersburg, PA, Jaye Lynn Johnston of Fort Wayne, Jeanne’ (Steve) Beck of Van Wert, OH, Harold (Tracy) Hazen of San Ramon, CA, Robert (Amy) Hazen of Naperville, IL, Carmel (Sean) Jones of Phoenix, AZ. Linda and Harold decided right away that all seven children were theirs and were never referred to as “step children”. Together they have 17 grandchildren and 9 great grandchildren. Linda is also survived by a sister Vera Carlene Smith. She was preceded in death by her parents, a brother: Alton Duon Wright, a sister: Mary Ruth Keith, a baby brother: James Wilson Wright and her husband Bob. Visitation will be held on Wednesday, May 11, 2022 from 12:00 pm – 1:00 pm at the Myers Funeral Home Huntington Chapel, 2901 Guilford Street, Huntington, Indiana. Funeral service will be held on Wednesday, May 11, 2022 at 1:00 pm following visitation at the funeral home. Interment will be at the Gardens of Memory Cemetery in Huntington County. In lieu of flowers memorial donations can be made out to Stillwater Hospice in care of Myers Funeral Home, 2901 Guilford Street, Huntington, IN 46750.
See more See Less

In Memory Of Linda Hazen