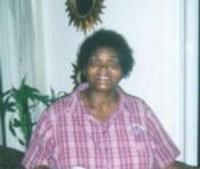 Ella Hollis May 5, 1938 June 26, 2010 Ella Eugene Hollis, 72, Las Vegas, formerly of Kokomo, passed away on Saturday, June 26, 2010 in Las Vegas. Mrs. Ella Eugene Gillard Hollis was born on May 5, 1938, the daughter of Mr. William Gillard and Vancie Gillard in Falkner, Mississippi. She received her elementary education in the Falkner public school systems and graduated from Ripley High School. She later moved to Kokomo. Mrs. Hollis was employed at Grissom Air Force Base while she was living in Kokomo. She later was united in holy matrimony to Edward Hollis in 1970 and moved to Las Vegas, where she was employed as a cashier at the Army & Air Force Exchange at Nellis Air Force Base. She was raised in a Christian home and accepted salvation at the age of thirteen at Bethlehem Baptist Church in Mississippi. Her mother preceded her in death. She is survived by her husband, Grover Edward Hollis; three sons, Stevie, Greg, Derrick Hollis, all of Las Vegas; stepson, Nathan Hollis (Ursula), Hawaii; father, William Gillard, Falkner, Miss.; sisters, Bobby Collins (Charlie), Hope Patterson (Randy), both of Kokomo; brother, James Gillard (Maerene), Falkner, Mississippi; seven grandchildren and a host of aunts, uncles, nieces, nephews, cousins other relatives and friends. Services are 11 a.m. Tuesday at Second Missionary Baptist Church. Pastor Robert A. Lee will be the officiant and eulogist. Visitation will be held from 9 a.m. until services at the churches. Burial in Crown Point Cemetery. Arrangements entrusted to Bluitt & Son Funeral Home. Online condolences can be left at www.williamsandbluitt.com

In Memory Of Ella Eugene Hollis