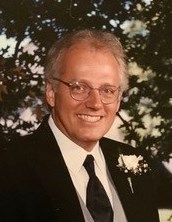 Gregory Joel Rest, 63, of Mechanicsville, Va., entered his eternal home last Saturday, May 23, 2020. He had been fighting the good fight with a neurological condition similar to multiple sclerosis. He is survived by his very loving family: his wife, Sandi Binda Rest; and their two children, Julia Mary Frances Rest, and Michael Robert Binda Rest; sister, the Rev. Dr. Kathryn Rest Thoresen (Thomas), brother-in-law, Dr. Robert Binda, Jr. (Amy); plus numerous cousins, nieces and nephews . He was preceded by his parents, the Rev. Heinrich Friedrich Johannes Rest and Mrs. Eleanor Riske Rest; sister, Margaret Rest Langford; brother, Dr. James R. Rest; father-in-law, Dr. Robert Binda; and mother-in-law, Mary Frances Binda. Greg graduated with honors and received a B.A. from the University of Michigan, attended graduate school at Stanford University, and received a Ph.D. from Rand Graduate school for Public Policy Studies in California and spent most of his career as Chief Methodologist at JLARC (Joint Legislative Audit and Review Commission) for the state of Virginia. Much of his research has led to considerable improvement in lives across Virginia. Greg and Sandi met at Reveille United Methodist Church at their singles fellowship gathering. He and Sandi were later married in 1999 and did a lot of travelling together, including trips to Greece, Germany, England, Ireland, and Hawaii where they swam with dolphins, Aruba, Mexico, and Rome. Together they created a faith-filled and fun-filled home. He also enjoyed classical music, the performing arts such as operas, plays, and ballets, participating in bible studies and church functions, spending time with family, shopping on Amazon, exploring new types of technological gadgets (kindle fire being his favorite), traveling, telling jokes and riddles, warm weather, all types of food (especially sweets), running, audio books, exploring his family heritage, dogs, solitaire, visiting his family in Germany, wearing funky wigs/hats on Halloween, and taking any opportunities he could to learn about himself, others, and our world. In spite of a body that increasingly imprisoned him, he led a good life, raising two amazing young children with Sandi, impacting people by his devotion and love for Christ despite hard circumstances, keeping people entertained with corny jokes, and staying mentally sharp through audio books and documentaries online. He gave us a shining example of continued grace under fire. He was attentive and very present with all of us.
See more See Less

In Memory Of Gregory Joel Rest