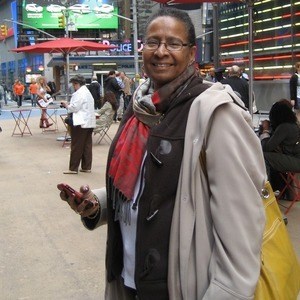 Brenda M. Box, of Springfield, Virginia, passed away Thursday, March 7, 2013. Brenda graduated with a journalism degree from Colorado State University, worked as a Capitol Hill correspondent for USA Today Broadcasting/Gannett News Service, as an anchor for the UPI and NBC/Mutual radio networks, and as a reporter for West Virginia Public Radio and WTOP Radio before coming to NPR 10 years ago. Outside of broadcasting she worked for the Wilderness Society and the National Wildlife Federation, and she served as press secretary for the District of Columbia's City Administrator. She was a long-time member of the National Association of Black Journalists, winning an NABJ Excellence Award for a series on Black Pioneers. The Gannett News Service honored her work for radio coverage of the 20th anniversary of the civil rights march on Washington. Brenda is survived by her husband, Steve Johnson; daughters, Chantel and Chanel; son, Anthony and two step children, Joshua and Maureen Johnson. She is also survived by her mother, Lillie P. Vaden, sisters Jennifer (Mark) Box, Dawn (Baxter) Box Givens, step-brothers John Vaden, III and James (Tia) Vaden, two step-sisters Candace (Ron) Alexander, Cheryl (Wayne) Tucker and five grandchildren. In lieu of flowers, memorial contributions may be made to the Panreatic Cancer Action Network, www.PANCAN.org

Newscast Executive Producer Robert Garcia writes this appreciation of Brenda Box: We are deeply saddened to announce that our beloved and respected colleague, Newscast Editor Brenda Box, has died after a courageous four years dealing with pancreatic cancer. She was 58. Anyone who ever worked with Brenda knows what a special and unique person she was: equal parts cynical and sensitive, outspoken and hilarious, brilliant and fun, and warm and self-deprecating. Brenda Box, NPR Newscast editor and good friend. Kathy Rushlow/NPR Correspondent Carrie Kahn, who largely dealt with Brenda on the phone, but grew close to her anyway, put it this way in a recent note to Newscast staff: "Every time I called Newscast and she answered the phone, no matter how stressed or busy she was she always had a few moments for a quick chat, great banter and that memorable laugh. Not that filing spots is not fun enough, but Brenda made it something special, personal and among friends." Newscast's Korva Coleman has a further explanation of Brenda's role in the unit: "Although you never heard her name on an NPR broadcast, she shaped what you heard. While you never heard her speak to you on the radio, she guided your understanding of events. Brenda Box was the editor that every journalist dreams of, one who elicits the best from reporters and quietly removes the errors. ... Brenda often concluded her conversations with her trademark, 'cool beans.' That was the indication that her exacting eye had reviewed the reporter's work and approved." There is no justice served remembering Brenda only in the context of her health issues in recent years. But it must be said that in this particular respect, she taught us all the true meaning of gentle grace under great adversity.

In Memory Of Brenda M Box