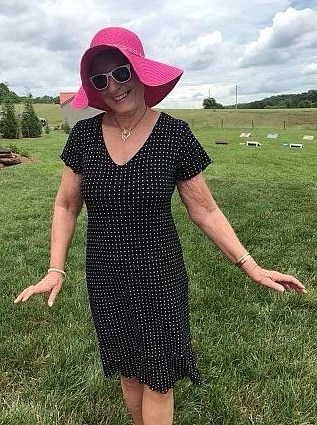 Joy (Spiggle) Tinsley, 70, of Verona passed away on Saturday, August 6, 2022 at her home surrounded by her family. Born May 14, 1952 at King's Daughters' Hospital in Staunton, she was the daughter of Shirley (Cline) Carter and the late Robert Lee Spiggle. She graduated from Fort Defiance in 1970 and attended Shenandoah Conservatory of Music where she studied opera and majored in Voice and minored in Piano. Following college, she met Jack Crummett and had two children, Tara and Cody Crummett, who went on to give her seven grandchildren. She taught her grandchildren how to love music and God which was her life. Her entire life music was what got her through everything. She was a musical prodigy in high school where she went to Madison College to have private voice lesson as a teenager which was unheard of in her time. Music was so much a part of her life, she even married a drummer. She had the lead role in the South Pacific in her senior year of high school. She was invited several times to the United Methodist Annual Conference. Joy was employed with Hershey Chocolate Factory in Stuarts Draft for over 22 years prior to retirement. She was a faithful member and served as the Director of Music at Verona United Methodist for over 30 years. Joy enjoyed writing poetry and had several of her poems publish. She will be remembered by those who knew and loved her by her artistic flare. In addition to her father, she was preceded in death by a brother, Jeffrey Spiggle. Survivors include her mother, Shirley (Cline) Carter; two children, Tara Welch of Lyndhurst and Cody Jack Crummett of Verona; grandchildren, Leah Campbell and husband, Cody, Taylor Wood and husband, Josh, Garrick Welch, Gracie Sheets, Cameron Cave, Addison Crummett, and Brycen Crummett; great-grandchildren, Amy Wood, Harper Campbell, Kase Campbell, and Sadie Wood; sisters, Grace Dick of Verona and Florence Parcell and husband, Ben of Rocky Mount, VA; brother, Robbie Spiggle of Mount Sidney; nine nieces and nephews; numerous great-nieces and great-nephews; and special friends, Vickie Crawford, Rhonda Reeser, Sheena and Jerome. The family will receive friends from 6:00 p.m. until 8:00 p.m. on Thursday, August 11, 2022 at the Stuarts Draft Chapel of Reynolds Hamrick Funeral Homes, 1870 Stuarts Draft Highway, Stuarts Draft. A memorial service will be held at 11:00 a.m. on Friday, August 12, 2022 at Verona United Methodist Church, 406 Lee Highway, Verona with Pastor Shawna Hiner and Pastor Ed Rigg officiating. Those desiring may make memorial contributions to Verona United Methodist Church. Arrangements have been entrusted to Reynolds Hamrick Funeral Homes of Stuarts Draft. Relatives and friends may share condolences and memories with the family online by visiting www.reynoldshamrickfuneralhomes.com
See more See Less

In Memory Of Joy (Spiggle) Tinsley