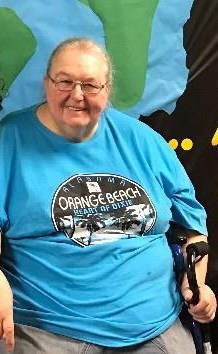 Jerry Ann (Long) Borden, 74, of Terre Haute, IN passed away on Sunday, January 15, 2023. She was born on June 18, 1948 in Terre Haute to George Long and Mildred Maxine (Miller) Bailey. Jerry Ann was a graduate of Garfield High School, class of 1966. She worked at TBM for over 20 years. She is survived by her 4 children: Kimberly A. Rogers, Terry F. Borden and wife Gina, Tonya C. DeCamp and husband Mark, and Eugenia L. Borden; 6 grandchildren: Ronnie McConnell II, Kaylee Parks, Taylor Borden, Trenton Borden, Christopher DeCamp, and Addison Borden; and her 2 great-grandchildren: Xiyla and Xaylen. Jerry Ann is also survived by several nieces and nephews. Jerry Ann was a member of the Apostolic Faith Tabernacle in Terre Haute. She enjoyed spending time with her family. She is preceded in death by her loving husband, Larry “Butch” Borden; her parents; sister, Billie Gail Christenberry; and her brother, George Long. A visitation will be held on Saturday, January 21, 2023 at Roselawn Funeral Home from 11am – 1pm. Funeral service will begin at 1pm at Roselawn Funeral Home, with a graveside to follow at Roselawn Memorial Park. Fond memories and expressions of sympathy can be shared at www.roselawnfuneralhome.net.
See more See Less

In Memory Of Jerry Borden

Visitation for Family and Close Friends