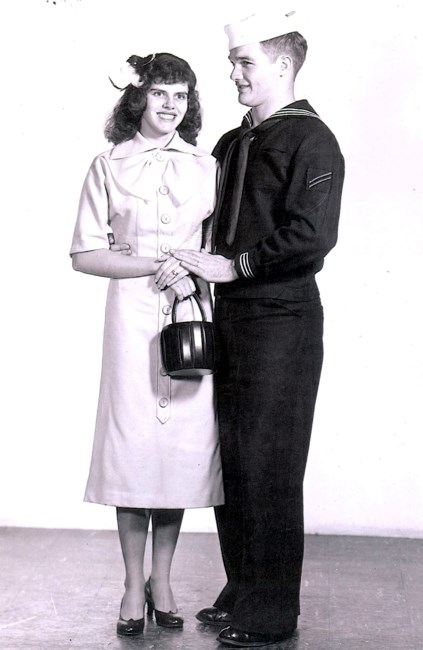 Ronald Edwin Matheny, Sr., 79 of Kacey Lane, passed away Sunday, October 29, 2017 at Martha Jefferson Hospital. Born September 24, 1938, he was a son of the late Ray and Virginia Gray Matheny. Ronnie was a veteran of the United States Navy where he served from 1958 to 1962 and a member of Holy Cross Episcopal Church. Prior to his retirement, he was the proud co-owner & operator of Matheny Well Drilling. He said it was the only job that he actually enjoyed. Customers would request Ronnie to display his divining powers even after retirement. Ronnie adored his wife and family. He lived his life to the fullest. He loved square dancing, going to bluegrass music festivals and went on lots of road trips. Ronnie was a great welder and would take railroad spikes and create a piece of art. Ronnie has given away over 2000 of his famous “spike men”. He made them for family, friends, strangers and quite a few famous musicians; Ralph Stanley, Marty Stuart and Little Roy to name just a few. In addition to his parents, he was preceded in death by a brother, Earl Matheny. Survivors include his wife of 59 years, Janie. His four sons, Ronald Edwin, Jr. and wife, Lynn, Raymond Keith and wife, Krista, Kevin Dennis and wife, Ellen, and Kenneth Darryl and wife, Beth; six grandchildren, Justen Garrett and wife, Laura, Ronald Edwin, III and fiancée, Amber, Kacey Tyler, Morgan Elizabeth, DJ and Taylor; five great- grandchildren, Riley, Brieanna, Colton, Weston and due to be born in January, Ronald E. Matheny IV; three brothers, Robert Lee and special friend, Nancy, James Dennis and special friend, Brenda, Donald Wayne and wife, Lillian; one sister, Joyce “Sister” and husband, Eddie Bowles and numerous extended family and friends. A service will be held 2:00 P.M. Saturday, November 4, 2017 at Holy Cross Episcopal Church, 2523 Craigs Store Road, Afton, with Father Tony Andres officiating. Burial will follow in the church cemetery. The family will receive friends from 6:30 p.m. to 8:30 p.m. Friday, November 3, 2017 at the Waynesboro Chapel of Reynolds Hamrick Funeral Homes, 618 West Main Street, Waynesboro, VA. Relatives and friends may share condolences and memories with the family online by visiting www.reynoldshamrickfuneralhomes.com

In Memory Of Ronald Edwin Matheny