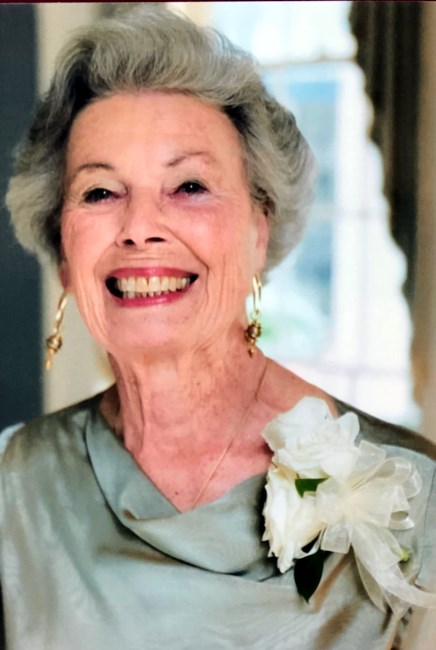 Jean Miller Canoles Bruce died Saturday, August 27, 2022 at the age of 95. A graduate of the College of William and Mary and a lifelong follower of Jesus Christ, Jean was the daughter of Leroy Thomas Canoles Sr. and Vera Hampton Slaughter Canoles of Norfolk Virginia. Married to her college sweetheart, John “Jack” Bruce for 56 years, she was the glue that kept family and tradition alive. She accomplished much in life, but none brought her more joy than her husband and family. Jean was a trail blazer. She stood at the forefront of women who forged careers and devoted time to community service all while raising families with the same passion. As a young wife and mother, she wrote freelance articles for Norfolk’s newspapers observing the lives of a generation recently home from war and starting families. Before startups in garages, Jean founded her own advertising agency in her laundry room. Highway Advertising’s first account was Farm Fresh Supermarkets. The firm grew to its successor company Bruce, Matthias, and Redmond. Leaving her company in good hands she landed at the The Planning Council, eventually becoming its Executive Director. For the next 25 years her aim was to link people needing a variety of human services to organizations working to improve the quality of life in Tidewater. Her work embodied her commitment to helping others. Active in civic life, she served on the Norfolk School Board, the Norfolk Planning Commission, the Hampton Roads Community Foundation, as a trustee of the William and Mary Endowment Association, as President of the William and Mary Alumni Association, Chairman of WHRO, and as the Chairman of the State Board of Social Services. In anticipation of retirement, she and Jack returned to Williamsburg where their lives together had originally begun. She continued to give back by serving on various boards, but mostly she created unbreakable relationships with her grandchildren, her Wine and Dine group, and her community. She reveled in William and Mary classes, the Christopher Wren Society, walking, travel, and her book group. When limited mobility sidelined her, she consumed countless library books believing that reading “furnished the mind” and allowed her to be transported to worlds she had not yet explored. She received the William and Mary Alumni Medallion in 1990 and the Olde Guarde Distinguished Service Award in 2009. She was preceded in death by her husband Jack, their infant son Stephen Mason Bruce, their son John Thomas Bruce, her sister Carolyn Canoles Redmond, her brother Leroy T. Canoles Jr, and granddaughter Sarah Calvert Bruce. She is survived by her daughter Linda Bruce Palmer and her husband Noah “Butch” Palmer, grandchildren Noah Palmer (Lisa), Jack Palmer (Rachel), Elizabeth Palmer (Blake Carrell), Alex Bruce (Janice) and Meredith Irvine (Jeff), 9 great grandchildren and countless nieces and nephews whom she treasured dearly. In celebration of a remarkable life, a service will be held in the Wren Chapel on the campus of the College of William and Mary on September 11, 2022 at 3 pm. In lieu of flowers, the family suggests contributions to the Jack Bruce and Carolyn Redmond Athletic Scholarship at William and Mary or Children’s Hospital of the King’s Daughters. While her sharp mind, ever-present wisdom, and knack for saying the right thing at the right time will be missed, her example of graceful contentment throughout the vicissitudes of life will never be forgotten by those who knew her.
See more See Less

In Memory Of Jean Canoles Bruce