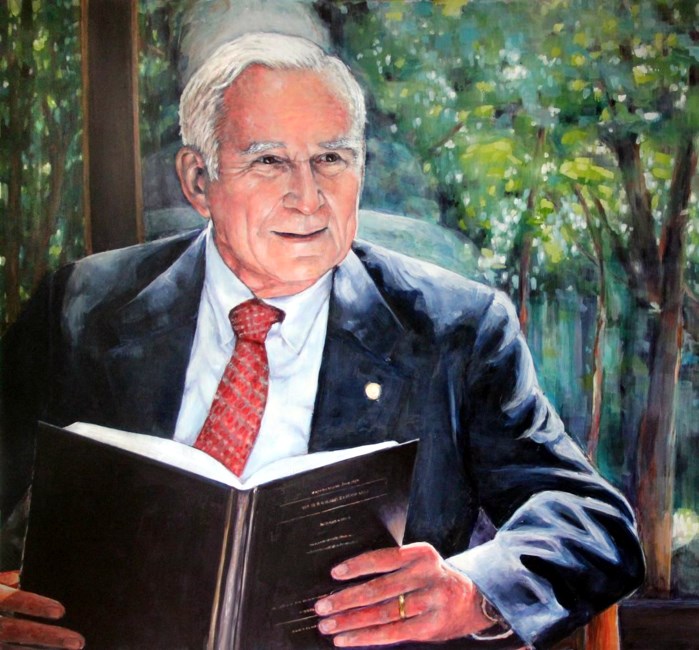 John Edward Donaldson, retired William & Mary law professor and former James City County Supervisor, died Tuesday, September 20, 2022, at his home in Williamsburg Landing. For 35 years he taught tax law, trusts, and estates, earning honors for his classroom instruction and, working with the Virginia Bar Association, recognition as a proponent of improving Virginia’s laws regarding guardianship, succession, probate, and matters related to trusts. He served for eight years as a county Supervisor, 1971-79, when the board adopted the county executive form of government to meet the challenges of rapid population growth. He chaired the board in 1975 and ’77. In addition, he was a member of the county planning commission, 1977-85, and, before the election of school board members, he served on the school board selection commission, 1981-1995. A list of his participation in community organizations and activities would be extensive and likely incomplete—ranging from advising state agencies and local charities with legal issues to cooking hamburgers in support of a daughter’s swim team or delivering pre-dawn donuts to volunteers at the Occasion for the Arts, an event chaired by his late wife, Sue. When family members and friends would come to him with a problem, his response was always, “Hit me with it.” Then, as a conversation ensued, the solution—the proper path forward—would become obvious. His reading choices were eclectic, ranging from history, to politics, to psychology, but never novels. For him, bicycling was the preferred mode of getting about in town. In retirement he and Sue enjoyed traveling, with memorable trips to Normandy, Tuscany, and Morocco. A cottage on the North Carolina Outer Banks was a retreat and a place for joyful family reunions. His affection for a succession of Labrador retrievers was boundless. John Donaldson was born in Richmond, January 31, 1938, the son of Thomas and Nelva Donaldson. He was graduated Phi Beta Kappa from the University of Richmond in 1960 and earned a law degree three years later from William & Mary (then the college’s Marshall-Wythe School of Law). He received a master’s degree in law from Georgetown University in 1966, the year he joined the William & Mary faculty. He officially retired in 2001, but his contributing association with the law never ended. On June 22, 1968, he and Sue Marshall Sheldon were married, only to end on her death May 7, 2021. Surviving him are a son, Kennon “Ken” M. Sheldon (Melanie) of Columbia, MO; two daughters, Keith “Kiki” Sheldon (Kevin Young) of Eugene, OR; and Jennifer D. Hubbard (Colin) of Telluride, CO; grandchildren, Camber, Sarah and Tristan Sheldon; Phoebe Sheldon Young and Piper Sheldon Young; Ryder and Kai Hubbard; a brother, Robert M. Donaldson (Mary) of Locust Grove, GA. The family will unite to place John’s ashes at rest in the William & Mary Garden on campus on a yet-to-be determined date. Donations to honor his memory may be made to Williamsburg Contemporary Arts Center, P.O. Box 388, Williamsburg, VA 23187; or Child Development Resources, P.O. Box 280, Norge, VA 23127; or An Occasion for the Arts, P.O. Box 363, Williamsburg, VA 23187. Fond memories and expressions of sympathy may be shared at www.NelsenWilliamsburg.com for the Donaldson family.
See more See Less

In Memory Of John Edward Donaldson