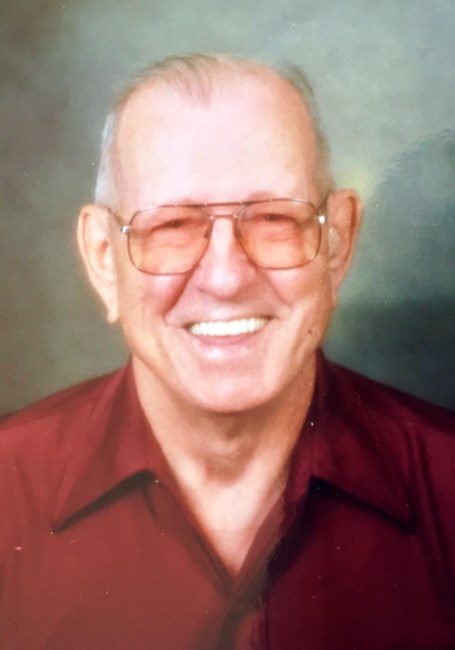 Earl Franklin Robbins September 12, 1924 through January 25, 2018 Earl was a man of joy, kindness and compassion. In his life he wore many titles; veteran, son, husband, father, grandfather, great grandfather, great-great grandfather, and Reverend Robbins. Family and God were central to his life. He was born and raised in Bedford, Indiana to John and Nellie Robbins. He left home for the first time to serve as an Army medic in the Pacific theater during World War II. Upon his return, Earl worked and retired from General Motors in Bedford after 30 years of service. Post retirement, he embarked on a new adventure to become an ordained United Methodist minister. Earl and his wife, Janet Shotts Robbins, ministered together for over 20 years in Indiana. Looking for challenges and not willing to slow down at the young age of 71, he and his wife moved to the Middle East to preach the word of God as missionaries. Upon his last retirement at the age of 86, Earl and Janet settled in Bloomington enjoying church and family until Janet's passing in the spring of 2017. As with many true loves, Earl never recovered. Earl was preceded in death by his wife Janet; parents, John and Nellie Robbins; two sons, Danny Robbins and Mike Price; and ten siblings. Survivors include son, Terry (Linda) Robbins of Bloomington; daughter, Sheryl Price of Fort Meyers, FL; brother, John (Colleen) Robbins of Bedford, IN, and a legacy of offspring. Funeral services to celebrate his life will be held at 1:00 p.m. Monday, January 29, 2018 at Day & Deremiah-Frye Funeral Home, officiated by the Rev. Ray New. Entombment will follow at Valhalla Memory Gardens where the Monroe County Honor Guard will perform military rites. Visitation will be held prior to the funeral service on Monday from 11:00 a.m. to 1:00 p.m. Please make any contributions in remembrance of Earl to Crossroads United Methodist Church, 6030 West State Road 48, Bloomington, IN 47404 Online condolences may be made to the family at www.DayDeremiahFrye.com
See more See Less

In Memory Of Earl Franklin Robbins