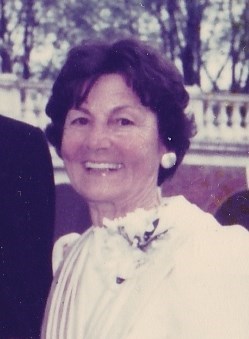 Shirley Mae Grabb was born in Cheboygan, Michigan December 29, 1923 to Arthur and Lena Lafrinere. Shirley had three brothers; Alfred, James and Edmond. She died June 30, 2021 at her home in Fairfax City, VA. Shirley graduated from Cheboygan High School during WW 2 and worked as a Nurse’s Aid at the Community Memorial Hospital during her last years in school. She also helped with chores at the farm her mother was employed at after her father died.

An excerpt from The Cheboygan Tribune, perhaps 1943: “Miss Shirley Lafrinere, a high school student, who after her day of study, makes the long walk up to the Community Memorial Hospital and works there at her duty as a nurse’s aid until eleven o’clock, when her day is ended. That sort of spirit is the spirit that makes America what it is today.”

After graduating, Shirley worked as a doctor’s assistant for seventeen years giving injections, taking X-rays, analyzing blood samples, and doing whatever else was required. She married Jim Grabb, a Coast Guard lieutenant, in 1961 and moved to Seattle, where Paul was born, and then Portsmouth, VA where Mark was born. Subsequently they lived in Avon, OH, Fairfax City, VA, Lexington, MA, and finally in Fairfax City, VA. Shirley has always been proud of her sons — Paul who is a pediatric neurosurgeon in Kansas City and Mark who is an engineer at General Electric Research in upstate NY. Her five grandsons were an added blessing, and being with them was always a special treat.

Shirley was always active. She loved to golf, bowl, run around the neighborhood, hike and camp, garden, bake and prepare meals. She was a Cub Scout Den mother, an active Little League mother, and the neighborhood mother that kids flocked to. She literally never rested.

Shirley contracted Lyme Disease in 2010 and immediately showed clear signs of dementia. However, true to her character, she continued to carry on doing her church oriented volunteer work at the Fairfax Nursing Center and The Gardens at Fair Oaks, as well as golfing and bowling. For many years she had a poster in her kitchen, “Don’t Ever Give Up.” She attended Mass at St. Leo’s until it was impossible to walk or stand. Shirley was the ultimate doer.

A graveside service will be held at 10:00 am on Monday, September 20, 2021 at Arlington National Cemetery.

In Memory Of Shirley Mae Grabb