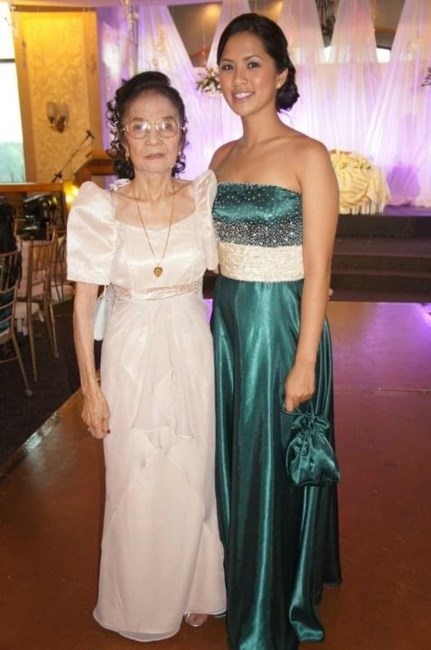 Remedios Corbillon Gapasin (lovingly called Mamang) was born on March 11, 1925 in Balingsay, Bolinao Pangasinan Philippines to Rita Salcedo and Marcos Naval Corbillion, rice farmers. On January 10, 1942 in Tupa, Bolinao, she married Gabriel Gapasin from Alamanos, Pangasinan during the midst of the Japanese War. They had 5 sons: Leopoldo, Mamerto, Romeo, Innocencio (Sean), Elpidio (Joey), and 3 daughters: Princesalim, Norma and Chita (Connie). The family immigrated to the United States in 1969 with the help and support of Gabriel’s brothers, Bartolome and Nick Gapasin. The rest of the family followed in the fall of 1970 settling in south Stockton. There, they would continue to face the reality as newcomers into a new world. Using their skill set as farmers in the Philippines, the Gapasins worked many hours in the Stockton asparagus fields, diligently working for very menial pay. Like many immigrants, the Gapasin family struggled daily laboring as farmers and doing what they could to keep food on the table and afford the amenity of sending their children to school. Though very arduous work, Gabriel (otherwise known as Papang), instilled in his children that hard, honest work would pay off. With this principle in mind, he, backed by his wife and children, was able to purchase a home on Boston Avenue in Stockton, California. This monumental structure was to many, much more than a house. It was the foundation where relationships were made, bonds strengthened and generations of families raised. It was symbolic of the blood, sweat, and tears that gave the Gapasins the strength to flourish during hard times in an unfamiliar world. But they made it a happy home and welcomed everyone in, with open doors. Papang and Mamang continued to live in the house on Boston Avenue throughout the early 1990's. After retirement, they then moved across the street from their children in north Stockton. Remedios lovingly tended to her backyard garden, growing organic flowers, fruits and vegetables as they had done so in the Philippines. She loved foraging for wild mustard, visiting the flea and farmer’s market, going to casinos for free gifts, and crawdad fishing. She had a hand in raising her numerous grandchildren and great grandchildren. She had a generous heart and was known to share her organic grown foods and her speciality, bobod, a rice wine pudding. Remedios only had a fifth grade education prior to immigrating because her family could not afford one but Mamang and Papang attended adult school in Stockton and were able to obtain their GEDs. She was also able to obtain a driver’s license and even drove around town in her turquoise Subaru! ‘Mamang’ as she was called by many, was a determined, witty, strong-willed, yet loving matriarch of the Gapasin Family. She was very much loved and respected by all. She lived to be 97 years of age! She was mostly proud of her long friendships and of course her family. Remedios and Gabriel Gapasin’s constant encouragement and legacy of getting an education lives on through the generations of children and grandchildren that have become successful entrepreneurs, engineers, teachers, artists, and nurses. She will be missed by us all. Remedios Corbillon Gapasin is survived by three sons, Romeo and Sonia Gapasin and family, Innocencio (Sean) and Esther Gapasin and family, and Elpidio (Joey) and Shirley Gapasin and family and two daughters, Norma and Stephen Solidum and Conchita (Connie) Hawley and the late Warren Hawley Jr. She is survived by 15 grandchildren and 24 great grandchildren. She is preceded in death by her husband, Gabriel Gapasin, children: Leopoldo (wife-Emelie Gapasin), Mamerto, daughter: Princesalim, and grandchildren: Robert Arquero and Eric Gapasin. Grandchildren: Robert Gapasin, Nancy Gnass, Cindy Maguire, Robert Arquero, Gina Gapasin, Ivan Solidum, Keien (Karen) Solidum, Anne Bolus, Eileen Gapasin Nguyen, Rowena Coronel, Megan Arquines, Eric Gapasin, Russel Gapasin, Liza Sey, and Estela Gapasin. Great Grandchildren: Hunter and Remy Gapasin, Zoe and Teodoro Gnass, Daisy and Ginger Kamp, Robert (Bobby) Arquero Jr and Elijah Bongbonga, Nathan and Roen Randall, Vina and Gio Solidum, Isabelle, Natalia and Emma Bolus, Iverson Nguyen, Maverick, Maxwell and Maia Coronel, Jaelyn, Maddyx, Jax and Matteo Arquines, and Leia and Vira Sey.
See more See Less

In Memory Of Remedios Gapasin

Church of the Presentation